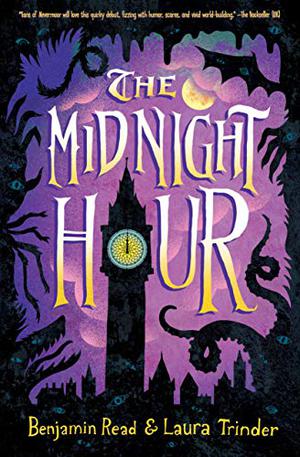 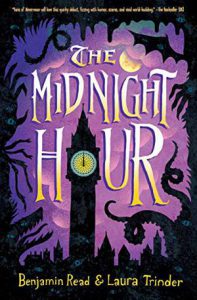 Readers of the Nevermoor series by Jessica Townsend and the Starfell series by Dominique Valente will likely enjoy The Midnight Hour by Benjamin Read and Laura Trinder. This fantastical tale features the young Emily Featherhaugh, whose mother’s idiosyncrasies turn Emily into a “human firework of foot-stamping rage” (2). Emily was shamed at school and accused of living like trash after helping her mother retrieve “important art materials” from the dumpster.  Even the City Council receives complaints that Maeve Connolly is a “crazy Irish art woman who makes noise at all hours” (2).

But when her mom receives a special delivery– a heavy, khaki-colored envelope from a giant carrying a small umbrella, she is summoned somewhere mysterious.  Because Emily is eavesdropping, she only catches bits and pieces about shadow keys, lesser horrors, and clan commitments.

When her mom’s absence grows long, Emily discovers that living in a Momless limbo leaves her equally distraught.  Despite being eccentric, her mom fills the house with color and laughter.  Eventually, Alan Featherhaugh decides that his wife may be in danger and goes looking for her.  When he doesn’t return, Emily goes looking for them both.

Emily’s journey takes her to a place that feels more like a bad horror movie than the London she knows.  Here, she learns that when science and progress drove magic from the world, the Night Folk were on the brink of extinction.  Because the creatures of magic need both night and magic to survive, the Older Powers forged an alliance with the queen of England to create a device that combined magic and mechanics.  This Great Working was intended to forge a place where it could be night forever and where magic could survive, thus dividing the Night Folk from the Day Folk.

In this realm, Emily discovers that her mom used to be an Assistant Librarian and her dad a Magic Postman specializing in Dangerous Deliveries.  Here, Emily not only encounters Pookas, vampires, dreamlings, and a wide variety of other unusual beings but learns the tale of the first of the Night Folk, three sisters: Art, Language, and Music.  Now one of the three—Nocturne, the musical sister, desires to destroy the Great Working.  Seeking freedom from the Midnight Hour, Nocturne has taken Emily’s parents to further her cause.

To save the magic realm and to rescue her parents, Emily must stop the evil Nocturne who threatens the Hour.  Even though none of it makes sense to Emily, in order to discover who she is, who her parents really are, and why they have never told her the whole truth, Emily must accept this quest with only her quick temper, argumentative mouth, and rich imagination as ammunition.