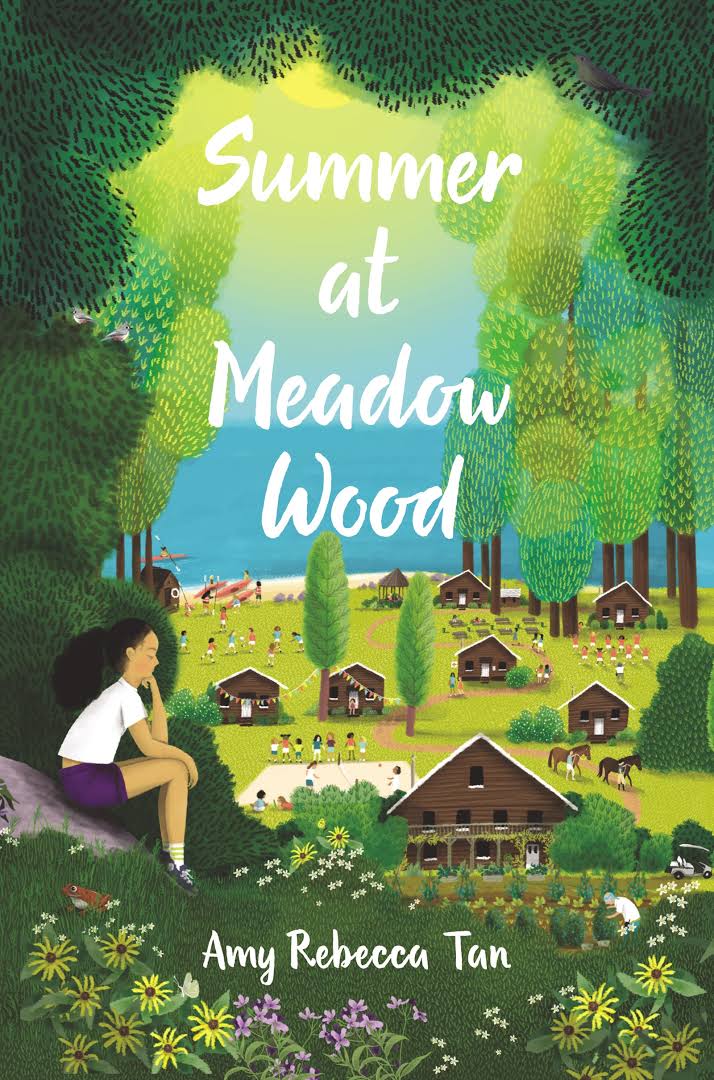 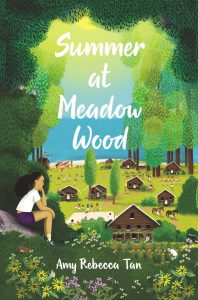 Summer at Meadow Wood by Amy Rebecca Tan tells the story of thirteen-year-old senior camper Victoria (Vic) Brown who is not happy with her mother’s decision to ship her off to Meadow Wood, a beautiful lakefront campus in New Hampshire where Vic has spent previous pleasure-filled summers.

However, this summer, Vic had plans for sleeping in, binge-watching old television shows, floating on a raft at the pool while checking out the lifeguards, and shining flashlight beams into the night sky as she and Jamie, her bestie in Pennsylvania, whispered their deepest wishes and fears to each other.

Instead, she is covered in sweat, fighting a headache, and yanking weeds behind a cabin in a camp elective—that she didn’t elect—called “farm.” Intensifying her ire, Earl, one of the camp’s sixty-something-year old caretakers, actually finds the back-breaking, heatstroke-inducing work calming and peaceful.

Add these discomforts to the fact that Vic has no canteen account money since her mother and father are considering divorce and money is in short supply.  With no canteen-provided junk food to comfort her and with her life falling apart, Vic wonders what kind of home she will be returning to.

Despite all of these downsides and given that the camp clinic has no medicine for the kind of hurt she is experiencing, Vic realizes she must not only survive this pain but thrive so that she can support her nine-year-old brother Freddy and be a good camp sister to Vera Simon, a gifted seven-year-old whose frog dies on the bus ride to camp.

As Vic learns where and how to look, she finds a different kind of happy from both expected and unexpected sources.  Her camp counselor, Chieko is cranky and sarcastic, but Vic gleans some wisdom from Chieko’s snark—mainly that a person learns by living.  This advice is actually from Eleanor Roosevelt, whom Chieko calls her soul sister.

Chieko also teaches Vic to shoot archery, something at which Chieko excels, “as if the archery range were the only place she could let her guard down and really be herself” (130).  With the growth in that relationship, Vic realizes that having weaknesses doesn’t make her weak.  After all, Chieko is “a lot like an archery arrow—tough as the steel point on one end and fragile as the crimped feathers on the other” (134). Chieko shares several of Eleanor Roosevelt’s books with Vic, who voraciously reads them and grows from their advice.  In fact, she becomes “the kind of person who would rather light a candle than curse the darkness” (358).

One of the unexpected sources of strength is Vera, a safety-focused, amphibian-loving girl who tells Vic: “To fix a problem, you have to name it” (52). Despite their age difference, the two actually share a mutually helpful relationship as members of the V-team.

Another surprising source is the garden prophet, Earl.  From him, Vic learns “You never know what you can handle until you try to handle it” (68). As the summer progresses, she develops a bond with Earl and comes to know weeding as therapeutic and the garden as a nurturing place on multiple levels.  Through Earl and their Saturdays at the Farmer’s Market, Vic also meets Angel Ramos.

Angel and his family grow and sell flowers, and Vic swoons under the gaze of Angel’s captivating green eyes.  Upon meeting Angel, Vic’s “lifelong never-had-a-crush-on-anyone streak” (207) dies, just like Vera’s first frog. Sharing their parental conflicts and venting about the challenges as well as the advantages of divorce, the two young teens bond over Hoefel’s donuts—warm and dusted with cinnamon sugar. Angel tells Vic: “Starting over was a whole lot better than fighting through the mess of trying to keep things the same” (249).

Under the influence of these experiences, Vic grows hopeful.  She further realizes that trial and error and the making of mistakes is part of life.  Learning from those mistakes and adjusting the results turns out to be the best option. An additional key is to focus on the What Now rather than the What If.

2021-03-12
Previous Post: Many Points of Me by Caroline Gertler
Next Post: Ancestor Approved: Intertribal Stores for Kids edited by Cynthia Leitich Smith