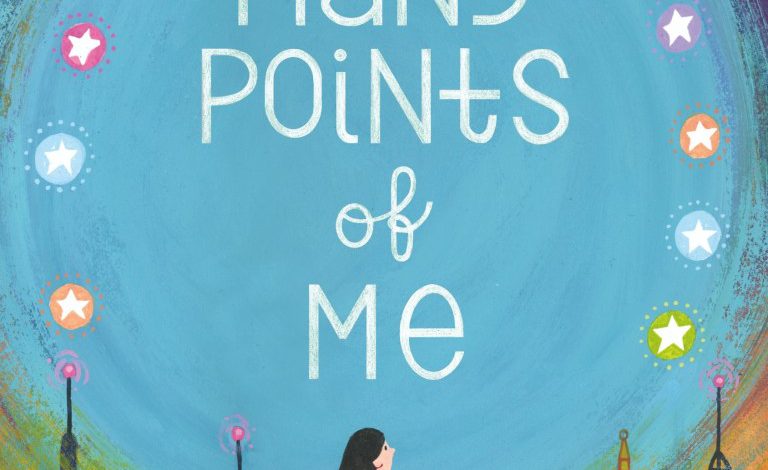 Many Points of Me by Caroline Gertler 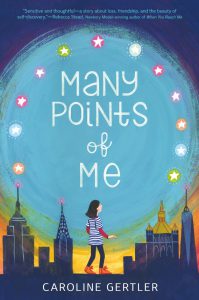 To cope with the stresses of middle school and the complications of life, Theo Goodwin escapes into his drawings where he can become Theo-Dare.  As his comic book alter ego, he conquers demons with his superpowers and the help of his sidekick, Super G.

Super G is Georgia Rosenbloom, another sixth grader whose biggest passion, aside from art, is astronomy. She and Theo have been inseparable friends since forever, and their mothers are colleagues at Columbia University.

When Georgia’s dad—the renowned and accomplished artist Hank Rosenbloom—dies suddenly, the loss throws Georgia out of her orbit. Unlike others who see the value of his art and the legacy he leaves behind, Georgia knew her dad as a person, not only as his paintings. Together they created mixed up animals. Now, Georgia feels strange and disconnected, like one of those animals. Prior to her dad’s death, the scents of the school art studio—a mix of oil with pine and clay and charcoal—offered comfort; now, they engender worry.  Although she wants to make abstract art like her dad—“art that shows feeling through form, color, and texture. Shapes that float on backgrounds of color” (12), Dad’s death renders her pencil inert.

When the prestigious NYC ART contest for sixth through twelfth graders comes around, even though Georgia and Theo have been waiting for the chance to be old enough to enter, Georgia no longer feels compelled to create.

The theme for the contest, Self-Portraits is also the assigned task in Mr. Butterweit’s art class, so even though Georgia will not be entering the contest, she still must submit something for class.  According to Mr. B, “the best portraits go beneath the surface to capture a sense of who the person is, or was. They reveal the truth of an artist. Truth with a capital T” (48).

Unsure of her truth and of what forms her core, Georgia discovers that doing a self-portrait challenges her. The authenticity that Mr. B tells her to find so that she can present her true self to the world is proving complicated under the burden of her grief. With her mother distracted by her work, Georgia is left adrift and trying to identify the various versions of herself. Yet, all she determines is that she is a jumble of different parts—like the mixed-up animals she and her father used to create. So weighted down by confusion, Georgia begins to lose the point of life.

Full of loss but trying to be strong, Georgia battles conflicting feelings about friends and friendship. Rather than getting stuck with the “old and dependable,” she branches out to find something new and different, but in the process, she may lose her best friend.

Other conflicts occur for Georgia in the form of a mystery: What or who was her father going to use as the subject for his fourth asterism? Was it Theo, one of his binary stars who inspired him to paint the stars in the first place? Was it Georgia, his daughter whom he called his other binary star? Or was it something else entirely?  This question, and the fact that Georgia might have to share her father at this time, makes her both angry and jealous.  So focused on her own feelings, Georgia doesn’t realize that he Dad’s death isn’t something that happened only to her but that it affected everyone close to her, as well as a sphere of art admirers.

As she untangles the mess she has created for herself with her actions—some of them with potential to compromise her integrity—Georgia eventually finds the pieces to put herself back together and is able to connect the dots—the “points of me”—to discover “a glimmer of something—a vision of who [she] can become” (336).  Although she will always feel the “Dad-piece that’s missing” (324), she trusts that “other parts will shift over it, and it won’t feel like such an empty space anymore” (325).

With creative metaphors and allusions to art and artists, Caroline Gertler’s debut novel, Many Points of Me tackles the topics of friendship, family, grief, and loss.  Her characters are their conflicts are relatable and relevant to young readers.