Used to building her life around empty spaces, around locked doors and unanswered 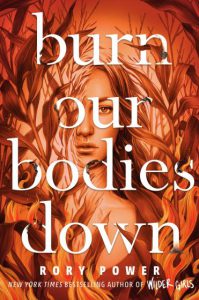 questions, Margot Nielsen is starved for details about her family and her roots.  All she has are her mother’s reticence, semi-coldness, and confusing and manipulative mannerisms. “How to keep a fire burning. How to stitch a fight up until it’s only a scar.  That’s the kind of thing you learn with a mother like mine. Mostly, though, you learn how to be loved without any proof” (8).

In a pawn shop where objects are cluttered and close, Margot finds clues to her past and a family.  Because she’s seventeen years old, drowning in doubt, and still struggling to forge a mother-daughter relationship, Margot runs away from her home in Calhoun, hoping to fill in the gaps where life used to be.

When she locates her grandmother Vera in Phalene, however, she finds more questions than answers. She learns of her mother’s traumatic past and about a history that is more haunting than comforting. She also discovers that giving one’s wounds to another does not define love.

Burn Our Bodies Down by Rory Power is a twisted tale of hurt, horror, and heartache. Power asks important questions about human nature—about parenting and how past behavior can’t be changed, how secrets are sometimes kept or truth withheld as a form of protection, and how we try to reckon with something that will never balance.

Although as humans we are flawed and we often do the best that we can, sometimes we have to break the cycle of generational abuse rather than perpetuate harm.  Understanding a person may not mean having to forgive them.

Power also includes a somewhat confusing thread about the toxic effects of a banned chemical which she calls ridicine.  It is unclear whether that thread is meant to reveal the depth of Vera’s madness or to warn readers about environmental toxins and the impacts that chemicals used in agriculture might have on producing genetic anomalies in both humans and plants.