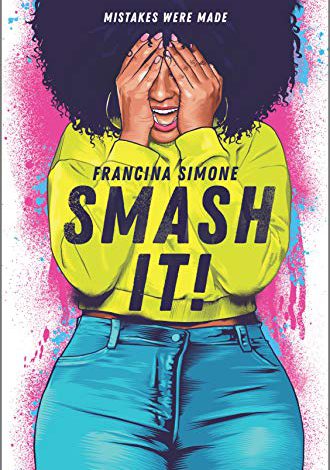 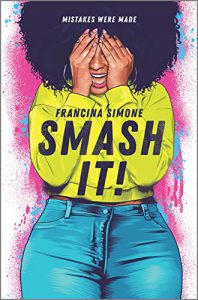 I suspect that many adolescent readers will find themselves in the pages of Francina Simone’s novel Smash It! The leading female in this book, which is dedicated to “theater kids,” seventeen-year-old Olivia James-Johnson considers herself a nerdy loser, a sad black girl with a “too curvy” body, and someone who does uncool things since she’s addicted to self-sabotage. Because she lacks self-confidence, she passes up doing what she wants because she’s afraid of being judged or looking like a clown.

A talented flutist who loves dancing, she can find a beat and step into it with her whole body. “When I dance, I feel like I am the beat. I twerk and grind in my room when no one is looking. . . . I’ve always been able to slide into a song like it’s telling my story” (68).

Olivia (aka Liv and O) has also loved musicals since she was ten years old. Although she has wanted to try out for the school musical since ninth grade, every year she makes excuses. Now that she’s a junior, she has decided not to waste another moment standing on the sidelines. So she declares this to be the year of saying yes to everything that scares her, to “be bold, to learn to take a compliment, and to stand out instead of back” (47). That list grows as the novel unfolds.

Flashy with his Spanish heritage, André Santos (aka Dré) is a Puerto Rican teen who is a talented musician and friendly with everyone. His jokes and teasing personality lend an air of humor and realism to Simone’s book while his fierce loyalty as a friend also rings true. He picks at Liv’s insecurities while also making her feel special.

With a stoic, classy vibe, Elijah Perez (aka Eli) loves history and writes poems about nostalgia and love. He has a brooding disposition and a desire to create music and sing, not just play cover songs. With his Palestinian and Israeli parents, he “won the genetic lottery” according to Olivia, who also knows that Eli’s way of resolving conflict is to hide from confrontation.

High school is a game changer for these three teens as they seek to carve out their niches, to take advanced classes, and to earn the grades essential for scholarship opportunities. Together, this trio of besties decide to try out for the school musical.  While acting their roles in Othello, they discover parts of their true selves.

As a member of the cast, Liv bonds with Lennox Baker, a bold and sassy gal who can spot a liar from a mile away.  Although she is a bit too free with her sexuality in my estimation, she inspires Liv to stand up for herself and to take risks. Looking at her intensely, she calls Liv out on her lack of confidence, telling her that her eyes see problem areas instead of potential.

Some of the wisest words like those are uttered by teens in this tale. In another situation, Eli tells Liv: “We’re all scared to fail or scared to admit we’re in love. We’re all stupid and smart all at the same time. We’re all good at something someone thinks is stupid. Being brave enough to do it anyway is the difference” (72).

A message related to that advice comes from a tarot card reader who does a free reading for Liv: “When we are scared, we lose ourselves in limiting beliefs. Stay true to yourself and you will overcome these limiting beliefs you have about yourself. . . . You know who you are. Now…believe in you, even when it feels like no one else does” (152-153).

With Eli and Dré as role models, O gives similar advice to Jackie, telling her to live out her own vision: “Just do you.”

Despite her deep dread, Liv decides to practice what she preaches and embarks on the Year of Yes! As she steps out of her routine, every choice feels forced and uncomfortable, wild and crazy.  Liv realizes that in order to stand out, she has to start standing on her own. Maybe she can embody the theater club’s motto: SMASH IT, which implies that a stunning performance is capable of blowing the roof off a place.

In three months’ time, however, Liv screws her life into a catastrophe. Immersed in this conflict, she recalls the tarot card reading, “You have great determination. It is your strongest attribute, but make sure to be kind. Because such stubborn determination to get where you are going can trample those in your path” (152).

Before her year of determination, Liv would often play the mediator whenever Eli and Dré held differing opinions on something: “You guys are just different. . . . Different isn’t bad. You want a band. You want to do covers. You want originals, and you want to grow the audience. . . . Instead of approaching [the situation] like a war, look at it like a puzzle—like a way to make the best thing out of a bunch of ingredients” (144-145).

Now, she’s faced with answering a key question. Is she in the musical for the songs and a possible hook up with a hot Hawaiian or for the experience to conquer her fears?  As she gets caught up in two different love triangles, she threatens to destroy both herself and her friendship with Dré and Eli. Eventually, she comes to realize that some love stories are about learning to love ourselves.

According to Liv, her mom has a “boss bitch attitude,” always finding fault and picking her apart, but she comes to realize that sometimes we’re so busy judging that we don’t see what someone is doing for us. When Liv is at one of her lowest points, her mom tells her, “You might not be responsible for someone’s feelings, but how you act and how you choose to behave says a lot about you. Your friend is hurting, and you know what his home life looks like right now.  The choices you make can affect someone else’s entire life” (300).

The Year of Yes turns out to have a learning curve but unravels into a year of lessons. Liv comes to the realization that adults make mistakes, too, and that good judgment and the ability to make good decisions come from a string of bad choices, mistakes, and missteps.  Along the way, she also learns valuable lessons about love, not the least of which is that “sometimes people fall out of love, and sometimes they need the space to figure out what love is. Sometimes they just make stupid mistakes” (350).