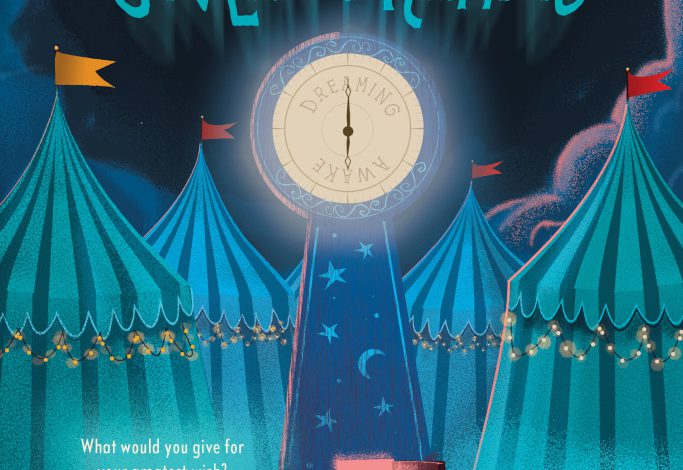 The Circus of Stolen Dreams 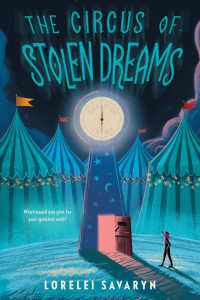 As a reminder of his memory, she carries a missing piece of her brother in her pocket. When the pain grows too intense to bear, she rides her bike far and fast, letting the breeze whip through her hair while imagining a place where bad things don’t happen;  somewhere brothers don’t disappear, parents don’t separate, and hearts don’t break from sadness and guilt. On one of those bike rides, she encounters an invitation to Reverie, Land of Dreams. “Come and join us, Come away, Forget your troubles. Come and play” (14), the sign reads.

The cost of admission is one dream or one memory—whether good or bad—that you wish to forget.  Eager to leave behind the pain of immense sadness and loss, Andrea quickly agrees to pay the price. Once the magic of Reverie has erased the haunting memory of the night her brother disappeared, Andrea feels so free and gleeful.

While in Reverie, she meets Penny Periwinkle, who takes her on a tour of this hypnotic world of dreams where all of the discarded dreams, nightmares, and memories have been captured in colorful circus tents that can be visited and exited and where laughter and merriment and enticing aromas waft. This is a world of pleasure, an escape from suffering where she can gorge on carnival food and happiness.

As she tours the various tents, experiencing the dreams and memories discarded by others, Andrea feels exhilarated to be in charge, for once, of when the horror ends.  In one of the tents, Andrea senses familiarity—this is one of her brother’s nightmares! With that discovery, she realizes her brother has been to Reverie and may still be here.

Intent on finding out what happened to her brother and getting her questions answered, Andrea sets out on a quest. That search leads to an encounter with the Sandman, who offers her a perfect wish, but desperate to find Francis, she makes that her vow.  By this time, she has realized that trying to forget isn’t the amazing solution she thought it would be.  She also discovers that Reverie isn’t all that it promises.

Although a book targeted toward middle grade readers, The Circus of Stolen Dreams by Lorelei Savaryn is rather philosophically profound and has appeal for a much broader audience.  Savaryn explores how quickly we can become trapped in a nightmare that was supposed to be a beautiful escape. She reminds young readers that life will hold sad moments, that bad will happen, that life does produce “loneliness, grief, hunger, poverty, fear, chains, a bridled mind, physical pain, [and] misunderstanding” (209).

These conditions may make us vulnerable enough to exchange the ugliness of reality for the lure of the dream world. Once tempted, we may discover a world where a trance state trumps suffering. These addictive devices and forms of escapism are designed to draw us in deeper, to trick our minds into accepting an alternative reality as more satisfying.  From Andrea’s experience in Reverie, readers will learn that “nothing about Reverie was right. Even if a kid wanted to escape a world where they felt like they didn’t fit, it wasn’t fair to take them away forever, trapping them in a make-believe substitute for real life, while the world went on without them” (190).

Savaryn’s book serves as a reminder that even though we’re all drawn to reverie and tempted to run away from life’s hard parts, distraction and avoidance are tricks.  Instead of drugs, alcohol, food, entertainment, or some other mind-altering or mind-numbing substance, what we really need is to find a healthy and temporary escape that enables us to recharge our strength and then return to life rejuvenated.

From Andrea, readers will learn that escapism is a trap and that “nothing can be changed until it is faced.” (Thoreau). In order to heal, Andrea has to turn and face what she is running from. Because life will never be as good as we can imagine, this process takes immense personal strength and self-awareness. Gratefully, Andrea realizes that she has been given a magnificent miracle called existence and that she cannot hide herself away in a dream, not really living. Instead of protecting herself from experiencing pain, she comes to realize that she needs to learn how to walk through it, allowing herself to heal.

With The Circus of Stolen Dreams, Savaryn invites all readers to ask: What do we give up to stay inside a dream? What are the consequences when we hide from life?