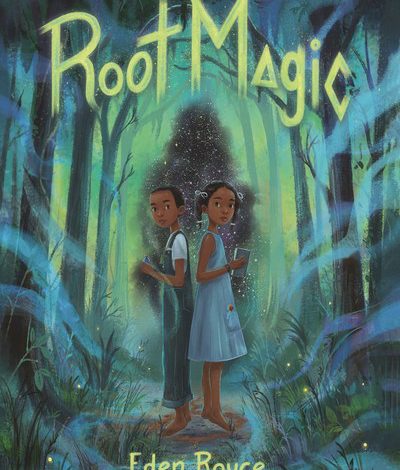 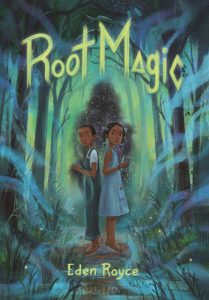 Set in the marshes of South Carolina, Root Magic by Eden Royce tells the story of James (Jay) and Jezabel (Jez) Turner—eleven year old twins whose grandmother has just passed. The marsh is a place of fascination, fun, and fear for Jez, who almost loses her life there to a haint.

Root Magic is Eden Royce’s way of paying tribute to her African American roots.  In an author’s note, Royce explains that although rootwork is not a religion, it is a spiritual and magical practice whose traditions are passed down in families. Rootwork, along with many of the African American food traditions, is one of the connections Gullah-Geechee people share with the African continent. Gullah is a language of English mixed with different West African languages. Hearing someone speak Gullah makes Jez feel closer to her Gran who often spoke it.

While she was alive, Gran breathed her spirit into a cornstalk doll for Jez so that she would always have a part of Gran with her after she was gone. Dinah comforts Jez, who deeply misses her grandmother, considered by many to be the best rootworker.

With Gran gone, someone will have to carry on rootwork, and Doc is determined to teach Jay and Jez. One of his first lessons is that everything in root needs intent.  Although healing is part of root work, it is also about protection from bad people and angry spirits. Jez is eager to learn how to make medicines and potions so that she can help her family and her community to stay safe, healthy, and happy. Giving people those gifts and a reason to be better become Jez’s mission.

However, there are plenty of people—both white and Negro—who don’t believe in rootwork and wish to undermine those who do, calling them old-fashioned and uneducated. According to Doc, “there are plenty . . .  who believe what we do ain’t right. That it ain’t godly. So we get a hard time from both sides” (19); “all skin folk ain’t kin folk” (140).

When Jez asks why they do rootwork then, Doc replies: “It’s part of our history. If someone doesn’t teach it, if someone doesn’t learn it, the magic will eventually disappear. . . . If no one tells the stories anymore, . . . [the ways of the Gullah Geechee people] will disappear from the world” (19).

Despite her dedication to her lessons and her loyalty to Gran, Jez discovers that being different has serious consequences when others desire conformity and assimilation. Even though she has been told that what other people think of her is not as important as what she thinks herself, the taunting and bullying she encounters at school threaten to destroy her resolve.

“I’d wanted so badly for this school year to be wonderful, and all I’d managed to do was make enemies and look silly in front of the whole class, every day. I wanted to disappear” (127-128).

Eventually, Jez comes to realize that what makes her different also makes her special. Miss Corrie the school nurse tells her: “Being different is hard, Jezebel. . . . But you have to learn to accept what makes you different. Most of all, learn to love it” (177).

On her path to acceptance, Jez confronts more than just the school bully Lettie. Her family has to endure the abuse of Deputy Collins and various forces from the beyond.

Besides the rich lessons tucked into these pages about preserving cultural heritage and embracing our differences, Royce’s book carries other valuable advice and truths: