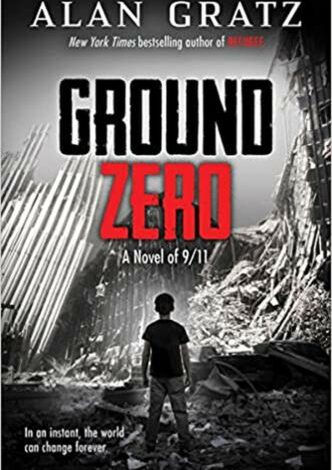 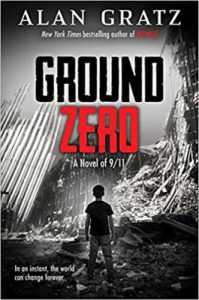 September 11, 2021 will mark the twentieth anniversary of 9/11, and Alan Gratz’s book Ground Zero is here to bring that history to middle grade readers. Told in alternating perspectives between Brandon Chavez, a nine-year-old living in New York City in 2001, and Reshmina, an eleven-year-old girl living in Afghanistan in 2019, the two tales run parallel to one another but ultimately intersect in a surprising twist.

As the novel opens, Brandon has been suspended for punching a bully in the nose, and because his mother has died and no one is available to watch him at home, he has to accompany his father to work on September 11, 2001. Leo Chavez works in Windows on the World, a restaurant on the 107th floor in the North Tower of the World Trade Center (WTC).

While his father is distracted, Brandon slips away to the underground mall to buy replacement Wolverine Gloves for Cedric whose were damaged in the fight that got Brandon suspended. While Brandon is riding the elevator, the first plane crashes into the North Tower. Panic, fear, and chaos ensue as Brandon makes every effort to reconnect with his father—his teammate: “This is how we survive, right? Together. It’s you and me against the world” (4).

With this harrowing incident, Brandon feels like he has let the team down yet again. Determined to return to his dad to tell him he is sorry for sneaking off this morning, for getting suspended, and for everything else he has ever done to make things difficult, Brandon works desperately to escape the elevator and trek back to the top of the WTC. Along the way, he encounters people who are trapped and burned and broken and jumping and dying.

Now Afghanistan is barren with little opportunity for a young man to grow crops and provide for a family, a situation which makes Reshmina’s twin brother, Pasoon, tempted to join the Taliban. Pasoon is not only lured by the promise of money but fueled by revenge and anger.

Reshmina, on the other hand, is hopeful and trusts in a brighter Afghanistan. Inspired by Marian, an Afghan woman from Kabul who serves as a translator for the United States Army, Reshmina has ambitions and dreams; after all, what point is there to living without them? Even though Reshmina doesn’t approve of an American presence in Afghanistan, this lover of language considers being a translator a far better future than being bartered off as a bride.

Unfortunately, Reshmina learns that hope can be dangerous and painful. While she is out gathering wood for her family, she encounters an injured soldier. Taz is wounded and temporarily blind.  If someone doesn’t help the soldier, he will die in the desert. But why should she care? “The Americans had killed her sister, after all. Pashtunwali, the way of the Pashtun people, said that it was right and just to seek revenge against someone who had done you wrong” (49). Trapped between feelings for badal (revenge) and a call for nanawatai (refuge), Reshmina is conflicted. Her compassion wins out, and she guides Taz to her family’s home.

Soon enough, Reshmina is praying to turn her brother’s heart from revenge and wishing she could undue her kindness of giving an American soldier refuge in her father’s house.

As Brandon and Reshmina work to set right a world gone rotten, they take the reader along on their scenic tours through two different versions of hell. Their experiences are harrowing and horrible. Even when they encounter moments of beauty like a field of poppies or the Warner Bros. Store, they realize these moments can be twisted into something sinister, like heroin and loss. How can beauty matter in a world where people fly planes into buildings and brothers join those who kill entire families for no reason—destroying everything we know and love?

From these two young people, readers see how even when we choose what is right over what is easy and when we dare to be someone better, those choices can actually bury us in grief. Still, Gratz’s story reaches beyond this gloom to send a message of hope and resilience. For Reshmina, it comes when she is trapped in a cave and she reads the ancient Pashto words painted on the wall: “We are content with conflict. We are content with fear. We are content with blood. But we will never be content with a master” (262).

Although the world can be a dark, evil, and scary place, something in us seeks the sunshine and flowers waving in the breeze. Through the two protagonists, young readers will realize that all choices have consequences. Furthermore, both realize that survival depends on everyone working together—not against the world but for each other and with both hands. Tucked in the pages of Ground Zero is a recipe for rebuilding; some of the required ingredients are hope, community, and empathy.

2021-03-24
Previous Post: Root Magic by Eden Royce
Next Post: In the Shadow of the Moon by Amy Cherrix