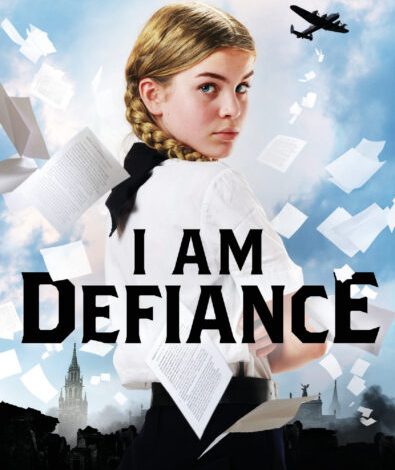 I Am Defiance by Jenni L Walsh 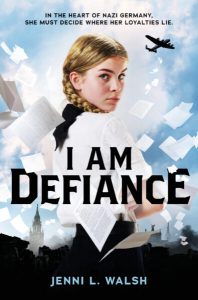 With her middle grade novel I Am Defiance, Jenni L. Walsh joins the group of authors who have written about the chilling period in human history that reminds us of the power of hate and the danger of silence: World War II-era Germany and Adolph Hitler’s reign of terror. However, Walsh takes her readers of historical fiction beyond that era to remind us all of the power of action, resistance, words, and asking questions rather than blindly accepting what we are told.

This book comes out in time to mark Hitler’s April 20th birthday so that readers might examine the truth through the curious eyes of twelve-year-old Brigitte Schmidt. Initially, Brigitte, whose mother died giving birth to her, tries to take as little as possible from her Papa and eighteen-year-old sister Angelika. Under the influence of that guilt and her sense of duty, Brigitte abides by the rules and is a model member of the League of German Girls, the Jungmädelbund or JM.

Basking in the glorious feeling of belonging, Brigitte yearns to someday be a leader with the JM. She and her best friend Marianne enjoy the gossip and giggling and games. There’s talk of patriotism, unity, solidarity, survival, and home.

However, some of the lessons presented during the meetings puzzle Brigitte—like that of racial purity. How could it be that anyone with mental illnesses, learning disabilities, deformities, paralysis, epilepsy, blindness, deafness, or another ailment be impure? How could Angelika, a survivor of polio who is spirited and stubborn, tough and resilient, be considered “less than”?

Because of these qualities, Papa calls Brigitte’s sister his petunia. Similarly, Papa, a biology professor at the university in München (Munich), refers to Brigitte as cornflower since her eyes are a purple-blue and her constant asking of questions suggests that she seeks the light.

Gradually, Brigitte comes to realize that anyone “who opposes Hitler is at risk of being sent to a camp or to a prison. Anyone who thinks differently, who acts differently, who looks different, whose insides are different” (56) could be killed or sterilized. Still, Brigitte’s curiosity creeps like phlox.

Walsh infuses her writing with other references to plants, as well—perhaps in part to honor the White Rose, a resistance group  led primarily by students who wrote and circulated anti-Nazi leaflets.  For example, Brigitte’s cat is named Tigerlily.  According to blessedgardens.com, the tiger lily represents the water element and the more powerful aspects of femininity, especially female courage.  In addition, tiger lilies are a hardy, resilient, and aggressive flower—once cut from the stem, another blossom will quickly replace it, and if not pruned often, tiger lilies can quickly overtake an entire garden.  These features all relate to Brigitte, who reminds her Papa of a rioter like her mother, someone “feisty and loyal and brave” (62), someone willing to “storm the store” in protest.

So begins the secret-keeping, pretending, and lying, which add to Brigitte’s guilt about being a bad sister or daughter versus a bad Nazi. Soon, Brigitte is voraciously reading the newspaper, fearful of the bombings and hoping the war won’t rip her family apart. Headlines like “Hate Is Our Prayer—and Victory Our Reward” cause her to wonder how hate and victory can go together. The one-sidedness of the news further confuses her, as does her sister’s bold acts of defiance, which ultimately endanger their family.

As more people disappear, the bombings escalate, and danger creeps closer and closer to home, Brigitte begins to wish that she “could simply freeze everyone involved” (134) and send Hitler to Mars, where he would no longer “have the power to hurt people like Johanna (Angelika’s best friend), tear families apart . . . simply because they believe differently than him, and sterilize people similar to Angelika, a so-called inconvenience to [Germany] because of disabilities they have no control over” (134).