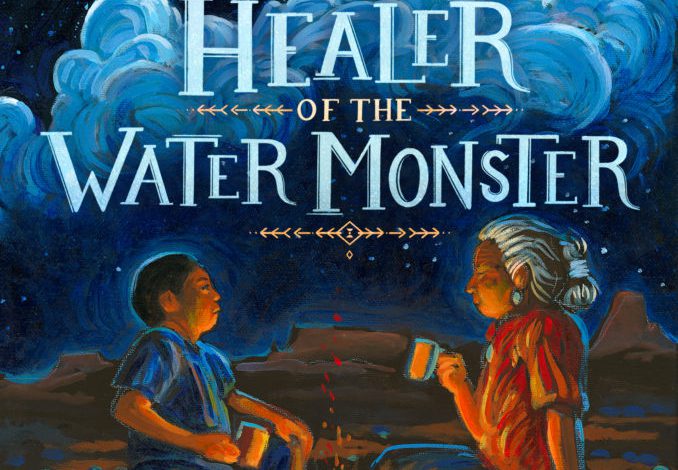 Healer of the Water Monster by Brian Young 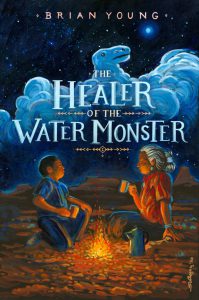 Eleven years old and living in Phoenix, Arizona, Nathan Todacheenie is bouncing from one parent to another after loud arguments fractured the family. Now his divorced dad is dating, and Nathan is not happy about having to share his dad’s time with Leandra. So, he concocts a plan to spend summer break with his grandmother, who summers in New Mexico at her ancestral home on the Navajo Reservation, forty-five minutes north of Church Rock.

Under the pretense that he will conduct a science experiment to compare water consumption between Nali’s (his grandmother) heirloom kernels that have been passed down to her through many generations and the modern, store-bought variety of corn seeds.

At Nali’s mobile home on Diné homelands, there is no electricity or running water, but Nathan believes he can survive for two months without his video games, cell reception, air conditioning, and flushable toilets.

Here, his grandmother tells traditional stories, often speaks her native language, teaches Nathan the Navajo way, and explains that “out here, away from the big cities, the Holy Beings have a much easier time connecting with us” (25).

While performing chores, Nathan catches glimpses of large footprints and jewelry-wearing horned toads. Unsure whether he’s hallucinating, he inquires with Nali, who tells him his culture is not a fantasy. She explains that, as Navajo, Nathan lives in two worlds with different ways and beliefs.

Nathan must navigate this diversity when his Uncle Jet turns up trapped—not only by alcoholism but by an Ash Being. Can he convince Uncle Jet of the importance of walking two paths to wellness: undergoing the Navajo ceremony N’dáá and visiting a therapist?

Nathan also learns that Holy Beings take many forms and often make themselves visible to pre-pubescent children. The more he pays attention, the more Nathan notices. He eventually befriends Pond, a water monster who is dying from uranium poisoning. In order to save his friend, Nathan will have to travel to the Third World for the medicine that will save Pond. However, in order to do this, he must say the sacred prayers and memorize the water monster songs, as well as overcome the four trials that he will confront in this new place. He must keep his bravery high and his mind alert. Will he be able to do all that in time to save his ailing friend?

Readers of Healer of the Water Monster by Brian Young not only discover the answer to those mysteries but will learn many Navajo words, traditions, and cultural practices. They will acquire knowledge about clan affiliations, the power of prayer, and how corn pollen contains holy attributes.

This novel targeting middle grade readers shares Nathan’s experiences with school bullying, navigating divorced parents, and trying to figure out how he fits into his own culture. These are potential connections, as are Nathan’s bouts with feeling worthless. Through Nathan’s conflicts and coping strategies, we may discover that we’re not alone, that others share our struggles and have found ways to survive.  We may also embrace the notion of hope’s power and the impact it has on our health: “Hope is a very powerful medicine and can give every minute we have alive a great deal of meaning and worth” (326)

2021-04-18
Previous Post: With You All the Way by Cynthia Hand
Next Post: Mending Summer by Ali Standish