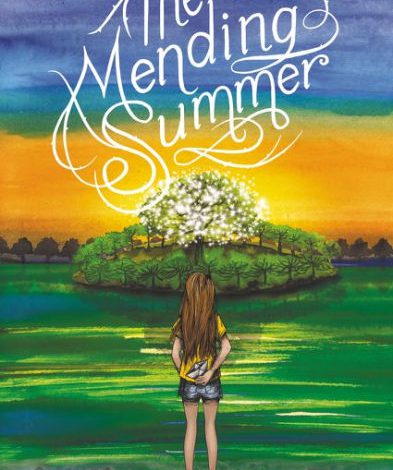 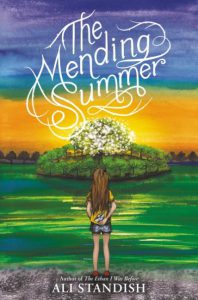 Set in North Carolina, The Mending Summer by Ali Standish tells the story of twelve-year-old Georgia Collins whose heart is breaking as she struggles to put her Humpty Dumpty family back together. Pursuing their own dreams, her mother is studying long hours for a degree in biology so that she can work in a lab, and her accountant father moonlights as a piano player who comes home transformed by alcohol into the Shadow Man, no longer the Daddy she knows and loves.

To protect Georgia from the fighting and the shame and to give herself more study time, Mama arranges for her daughter to summer in the country with her great-aunt Marigold. Here, Georgia imagines herself a brave and ruthless girl who keeps a scabbard slung around her waist. There are also mysteries to solve: about her often stoic aunt, a locked room in the farm house, a graveyard garden in the forest where an angel stands guard, and an island where magic can occur. Georgia is certain that these places and their secrets are all somehow connected, and she is determined to find out how. Despite being daring, strong, and brave in her discovery process, she is convinced that someone is following her in the forest.

As her adventures play out and the threads of reality intertwine with her imagination—leading her to places unknown, Georgia assesses whether a heart break occurs bit by bit or suddenly and violently, breaking into a thousand pieces like the mug Daddy throws against the wall in anger. Her summer sister, Angela accompanies her on this mending journey.

Mouth twitching with a smile and eyes gleaming with adventure, Angela makes Georgia “feel easier in her own skin” (59). She keeps the threat of despair at bay and helps Georgia to work through her struggles, telling her that pretending and ignoring don’t repair a broken heart or any other difficult issue; it has to be faced head-on.

While focusing on Georgia’s efforts to resolve her conflicts, Standish threads themes about the transformational power of both art and hope. Georgia’s mysterious great aunt is a potter, who teaches Georgia that clay has its own mind. “It’s no use trying to control a thing that has a will of its own.  It’s like writing poetry. You can’t force a bunch of words into the shape of a poem. You have to let the words guide you as much as you guide the words” (141). The comparison easily translates to human behavior.

Georgia notices how the act of creating in the studio transforms her aunt, smoothing out the wrinkles until she looks nearly peaceful and bringing out the soft, buried parts of a person. Marigold further describes her motivation for making as bringing “something beautiful into the world” (186). Soon, Georgia, too, relishes the time spent creating something useful and beautiful. She relates her ability to transform a lump of clay to the wishing lake’s power to work magic.

Both art and the wishing lake contribute to the mending of Georgia’s heart, helping to lift the weight of despair. To illustrate this, Standish employs the metaphors of feathers and flying. Even though the allusion is indirect, the reader might be reminded of Emily Dickinson’s poem, “Hope Is the Thing with Feathers.” Hope has immense—almost magical—power to renew the human spirit and revive a belief in possibility. Like wishing, it provides temporary escape and some respite from worry; it conquers some of the anger so that love can creep back in.

Georgia’s Aunt Marigold reminds her that we can’t waste our precious lives waiting for someone else to change or trying to make it so. “There’s no use losing yourself tryin’ to save somebody else, hear? . . . You have to remember that it’s not your responsibility to make [your daddy] better” (321).

Perhaps one of the most memorable points that Standish makes about the magic of wishing and hoping is that “maybe we don’t always get what we wish for, but sometimes life gives us other gifts instead.  Things we didn’t know to ask for” (341).  Another point to consider is that “sometimes, things need to be broken so they can be put right” (357).

2021-04-23
Previous Post: Healer of the Water Monster by Brian Young
Next Post: Zara Hossain Is Here by Sabina Khan