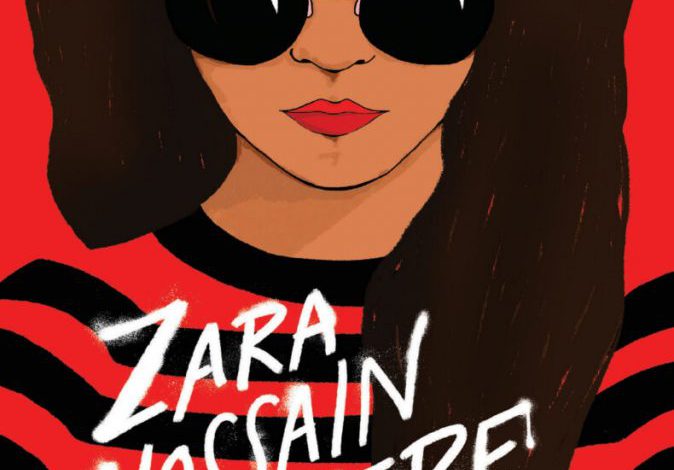 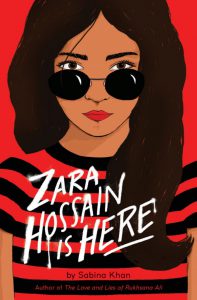 Readers of Zara Hossain Is Here accompany driven, intelligent, community-minded social justice advocate, Zara Hossain on her mission to bring awareness to the sacrifices and struggles that immigrants face in the United States. In response, I vacillated between tears, anger at the injustice that brown, non-gender conforming individuals endure, and the occasional sense that some generalizing was taking place under the influence of Sabina Khan’s pen.

Without wanting to minimize the challenges faced on a daily basis by someone who experiences otherness, I—a white, heterosexual, cisgender female—couldn’t help but say, “I don’t belong to that hate group, and I am always appalled that people’s core beliefs harbor such intolerance.”  I know that racism is alive and ugly; it just doesn’t make sense to me. Nor does a life combatting diurnal microaggressions, managing anger, or coping amidst persecution sound satisfying. I would likely channel that negative energy in the constructive way that Zara does—with tae kwon do kicks and patterns and by adhering to its tenets: courage, integrity, perseverance, self-control, and indomitable spirit. I could only hope to be that strong.

Nevertheless, through Khan’s characters and their plight, readers might be inspired to examine their own biases and to stand in the shoes of a brown-skinned person who gets viewed from a distorted lens, who gets left out because “people with dirty skin aren’t allowed” (208). They might also be moved to action that effects change, to advocate for “those who have made this country richer by bringing their traditions and languages and values” (10), people who have made valuable contributions and are vital to enriching the fabric that this country is made of” (206).

After all, Zara’s father comes to this country from Pakistan to give his daughter a better life and more opportunities. As a pediatrician, he contributes to the health and wellness of multiple other children, as well. For fourteen years, the Hossain family has resided in Corpus Christi, Texas, under Iqbal’s work visa. Their green card application has been in-process for eight years.  What does such a lag time say about the efficiency of the immigration system for those legally entering this country?

Seventeen-year-old Zara is fortunate to have such a strong friend base, people who have her back and provide the necessary support: Nick Garcia, a third-generation Mexican American who stars on the football team at Our Lady of Perpetual Succor High School and is firmly planted in Zara’s friend zone; Priya Nair, whose family is from Kerala and whose father is an anesthesiologist; and Chloe Murphy, who becomes Zara’s girlfriend and is committed to the same causes.

Zara also has advocates in family members, like her lawyer Aunt Shireen Khala, and teachers like Ms. Talbot who advises the Social Justice Club (SJC). From Ms. Talbot, the SJC learns about the License to Discriminate Law and the value of speaking out for the marginalized, as well as educating themselves about issues that affect us all. She also inspires students like Zara to research the Immigration Acts of 1917 and 1924 and to write about the inequities and indignities of the U.S. immigration system. Group members not only write letters or start petitions but attend rallies and demonstrations to stand against terrorism, hate, and racism.

Another point of good fortune for Zara is that her parents have always encouraged her to keep an open mind and to question and explore issues and opinions, not blindly believe and follow. Because of her awareness, Zara can see people who are hurting just for wanting to be who they are. Ms. Talbot is also accurate in saying that awareness takes time. To people like Tyler Benson and his father, Zara’s family are Muslim immigrants, always “the other.” Zara knows that feeling well. It is a sense of encroachment on someone else’s space, an unbelonging that never goes away, no matter what [she does] to fit in. And although [she loves] her life here, it takes just one person like Tyler to make [her] feel [she] can never fully belong. [She doesn’t] want to believe that the color of [her] skin, [her] beliefs, and [her] native tongue will forever brand [her] an outsider, but Tyler makes that seem like a real possibility” (55-56).

Because of these feelings, Zara takes it upon herself to speak out against racism and hate-mongering. She is certain that changing attitudes is up to her, but on her path to effect change, she encounters more than her fair share of people who won’t see reason when “they’re hell-bent on staying ignorant” (157). Zara wants to know how someone’s right to exist trumps that of another’s rights.

When her family gets caught in the crosshairs of the fight, Abbu and Amanni decide they’re ready to move back to Pakistan. However, even in Pakistan, Zara will have to pretend to be someone else, to hide her bisexuality to fit in. She may no longer be the brown girl standing out as the target of someone’s hate and racism, but blending in will mean sacrificing many of her freedoms.

In addition to discovering the novel’s resolution, the reader will learn much from Khan’s thought-provoking novel about the feeling of otherness. Readers also gain copious information about traditional Pakistani cuisine, customs, and clothing as well as getting a glimpse of the culture that is lived day to day through that group’s language, family kinships, and community social networks.

2021-04-27
Previous Post: Mending Summer by Ali Standish
Next Post: Cece Rios and the Desert of Souls by Kaela Rivera