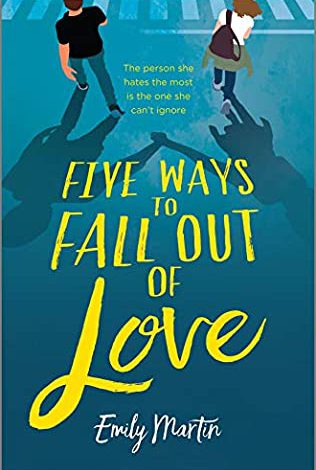 Five Ways to Fall Out of Love by Emily Martin 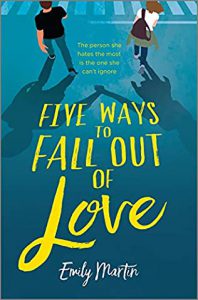 A senior at Grove Hill High School in Michigan, Aubrey Cash aspires to be a veterinarian, but her best friend Reese is cursed with a romantic streak.  As a cheerleader, she is constantly encouraging Aubrey to date. Using her “Disney Princess Face,” she plays matchmaker. But in Aubrey’s scientific mind, “The whole concept of true love is inherently flawed” (45).

Basketball star, Webster Casey is new in town after his parents’ recent divorce. Because he lives across the street from Aubrey, the two form a connection until Webster inexplicably fails to take her to the homecoming dance as promised. After getting close to a boy and then being ghosted, Aubrey is not about to repeat the same experiment and expect different results.

In true researcher fashion, Aubrey applies the principle of Bayesian probability to the likelihood of a relationship’s endurance. Taking into account human unpredictability, she hopes to find evidence that explains not just why but how a relationship ends. “Because there have to be certain ways of falling out of love that hurt less than others, and she wants to know what those are” (83).

Collecting data from her parents’ conflict riddled marriage and Reese’s multiple ex-boyfriends leaves Aubrey feeling that happiness is temporary. Fixating on these failed examples, however, might just be skewing the evidence towards her own pessimistic opinions. Aubrey realizes that change requires actual work and that Bayes’ theorem shows us how to change our minds when we have new experiences.

Aubrey falls into a routine: school, homework, sleep, repeat until Reese knocks her out of it to attend a social event where she meets Webster’s cousin Holland Sawyer. Holland laughs easily and listens well. He’s optimistic, attentive, and a dog-lover who also plans to pursue veterinary science in college.  Soon, he and Aubrey are in a full-on flirtationship. When Webster calls Aubrey his girlfriend, she realizes she is one step closer to becoming an ex-girlfriend and one step closer to all the pain and anger and loneliness she has seen Reese go through countless times and which her own parents are currently going through.

Despite the apparent success of her relationship with Holland, Aubrey is not able to say she loves him back when he drops the L word. Furthermore, as hard as she tries and as much as Webster annoys her, Aubrey can’t seem to shake her feelings for him. Maybe Webster feigns indifference to protect himself—because if he doesn’t seem to care about something, no one can use it against him. Back and forth she goes.  Instead of acknowledging her own feelings, Aubrey actually engages in self-sabotage, adding more evidence to her research.

Eventually, Aubrey has to admit that love isn’t science, that we can’t engineer a relationship like a recipe, and that she’s not defined by who she is dating. And “whatever biology may be behind physical attraction or attachment, relationships don’t have a set of guiding principles [we] can follow to ensure success” (181-182).

In her romantic comedy, Five Ways to Fall Out of Love, Emily Martin explores all of these plot points while also taking a serious look at a complicated topic. After all, we’ll never know the exact formula for a successful relationship and to what degree mutual attraction, personality, and compatibility figure in “versus finding that person who will push you, who drives you crazy half the time, but also makes you feel alive” (252).

2021-06-14
Previous Post: An Emotion of Great Delight by Tahereh Mafi
Next Post: Bridge of Souls by Victoria Schwab