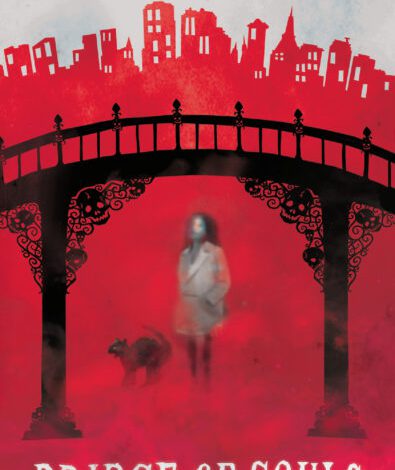 Bridge of Souls by Victoria Schwab 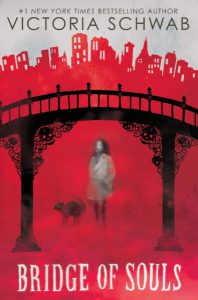 Young readers looking for a good ghost story with adventure and history stirred in will find it in Bridge of Souls by Victoria Schwab.  In this third volume in the City of Ghosts series, Schwab features twelve-year-old Cassidy Blake whose parents are the Inspecters: World-traveling, ghost-hunting, paranormal investigators. As they travel the world to produce film accounts of their findings, Cassidy tags along from Paris to Edinburgh and beyond.  This episode has the family filming in New Orleans, a place where color, style, and sound collide; a place of contradictions.

Although Cassidy has always had a brain that doodles, helping to show her things that aren’t there, after her near-drowning, she has a way of seeing more.  She also acquires an “invisible friend” in Jacob Ellis Hale, who is her best friend and the resident ghost.  In fact, it is Jacob who saved Cass’s life.  Jacob himself drowned trying to rescue his little brother’s toy.

Now, the two are partners in crime as Cassidy works to rescue spirits that are trapped, caught in a kind of loop of their last moments, and it’s her job to send them beyond the Veil. The pair is connected in an uncanny way—a manner that displeases Lara Chowdhury who believes that Cass should send Jacob on before he becomes dangerous. Already, he can read Cassidy’s unspoken thoughts.

Lara is also a Veil-walker, an in-betweener who nearly died but is granted a second chance at life. A person becomes an in-betweener after having a close brush with death, a one-foot-in-the-grave kind of close.  A clever, selfless girl, Lara lives in Scotland, but when she realizes her friend needs her because she is being pursued by an Emissary of Death, Lara flies to Cassidy’s aid.

Together, the trio attempts to uncover why Death has sent an Emissary, one claiming that Cassidy is a thief who needs to be returned to the dark.  In order to sever the line that Death has cast, the group will need information—details that can only come from the Society of the Black Cat and from behind the Veil.  The Veil isn’t really just one place.  “It’s a collection of remembered spaces, stitched together, each tethered to a ghost, their life, their death, their memories” (55).

With her head full of fear and questions, Cassidy learns she will have to perform a banishing spell.  However, when the Emissary realizes that Lara has also escaped Death’s net, Lara becomes a target as well.  Cassidy’s effort to save her friend takes her to the Bridge of Souls where the three fight an epic battle.

In addition to telling a good story, Schwab shares some truths about human nature. One of those is revealed by Cassidy’s dad: “Most people don’t believe in a thing unless they see it for themselves. And if they see it, they’ll believe it, even if it isn’t real” (67). Another is imparted by her mother, who attempts to explain why people tend to enjoy spending time with the dead: “People come from far and wide just to tour the graveyards. They treat them like art galleries, museums, history exhibits. Some come to study or pay respect to the dead, but others simply like to wander among the quiet crypts” (110).  Mom also says, “The best way to find yourself is to let yourself get lost” (185).

A fourth moral is spoken by Lucas Dumont, a historian and skeptical scholar who serves as the Inspecters’ tour guide in the French Quarter.  From him, readers learn that history teaches us how to live in the present.  Ultimately, through the novel’s protagonist, even the most curious and intensely independent of  readers will learn to proceed with caution and realize there is a time to ask for help.

2021-06-19
Previous Post: Five Ways to Fall Out of Love by Emily Martin
Next Post: The Lost Girl by Sangu Mandanna