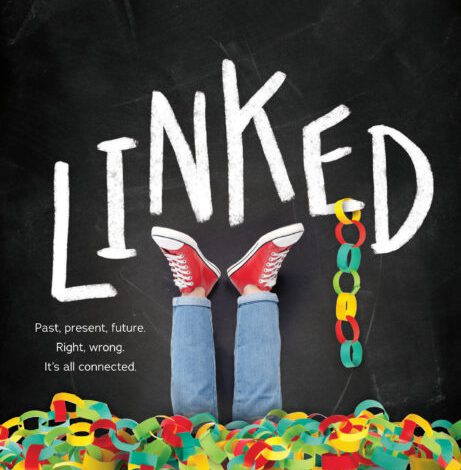 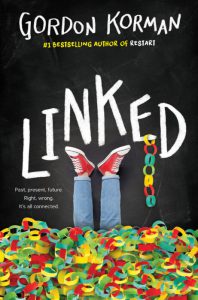 Told in 33 chapters by seven voices, Linked by Gordon Korman shares the story of a swastika that sets in motion a series of unintended consequences.  Because the administration at Chokecherry Middle School believes that information is the best antidote to the poison of prejudice, the 600 students who attend are subjected to tolerance education. Still, the swastikas continue to show up.

What initially seemed to be a sick joke turns into something more sinister. The persistence dredges up 40-year-old memories of the Ku Klux Klan in Shadbush County and the Night of a Thousand Flames.  Soon, the quiet town of Chokecherry, Colorado, is made famous as a racist location by vlogger, Reeltok, and his YouTube Channel.

For George Rowley, President of the Chamber of Commerce and a real estate agent, it’s all is about the optics and how things look.  Because he can’t have his town looking bad and a nasty rumor messing up its future, he files a lawsuit against Reeltok.  Link’s dad uses the same philosophy on his own son, which is why the star athlete has been benched from soccer for a previous prank.

The bubble of speculation swells as the list of mystery suspects for Swastika Guy grows. Yet, the cops can’t identify the culprit. Among the first suspects are Lincoln Rowley, Jordie Duros and Clayton Pouncey—a trio of practical jokers who spend too much time pranking and goofing. A swastika in the school’s atrium is just the kind of thoughtless mischief that carries their trademark.  Then, there’s Michael Amorosa, who was the first to discover the vandalism. But, one-by-one, each boy loses his position as a suspect.

When the swastika artist doesn’t quit marking the school, Link’s mother gets worried and reveals to her son that he is of Jewish heritage.  Link is initially angry, then confused. “Finding out you’re different from what you thought you were is weird. . . . All these years I’ve been somebody I didn’t even know I was!” (46).

To fight back and to show whoever’s behind the swastika branding that “we’re all connected as a school community, and one evil person can’t break us apart” (71), the art club president suggests they do something to commemorate the six million Jews whose lives were tragically taken—something like “a paper chain—with six million links” (71).  Considered one of the popular students, Link agrees: “Interlocking loops of multicolored construction paper. . . . it’s also a picture of unity, the interconnecting links like a long line of people standing arm in arm against intolerance and hate” (71).

As the town gains fame for its response to the swastikas and the paper chains start to take over the school, the town’s storage buildings, and even local silos and  attics, the chain begins to represent more. It’s no longer just loops of paper, but names, faces, lives, and stories of human tragedy and survival.

Hoping to find yet another way to connect to the heritage he didn’t know he had, Lincoln decides to embrace his Jewish roots and to train for a bar mitzvah. Although Dana Levinson, the “only” Jewish girl in school, thinks this is just another one of his pranks, she agrees to help Link prepare. Through Dana, the reader learns about swastika anxiety and the unbearable weight of others who consider her a spokesperson for all Jewish people.

When a classmate accuses Dana of trying to turn the whole town Jewish with “her” paper chain, she fires back: “It’s not my paper chain. . . . You know what’s a Jewish thing? Dealing with idiots who make comments like [saying the Holocaust is a Jewish thing]!  First off, at least five million non-Jews also died in the Holocaust. Second, just imagine for a second a government deciding to wipe out every single person who was born into your religion.  There’s a word for that—genocide! And it’s everybody problem, because if it happens to one group, it can happen to any group” (136).

Later, when members of the town suggest that the Night of a Thousand Flames never happened, that it was made up by the media, Dana exclaims: “Denying the past is the surest way to make sure it happens again!” (156). Although the paper chain started as a school project, it eventually comes to belong to the whole country, as other schools contribute chains and as states and businesses donate art supplies and paper.

With its multiple perspectives, Korman’s novel eloquently unravels the mystery for a “town named after a wild berry sour enough to change your outlook on life, with a pit the size of a cannonball” (9). With their paper chain, their formation of a unified bond, and their being forced to confront the present truth as well as their history, the townspeople take the bad and turn it to good.  In Michael Amorosa’s words: “It shows that tolerance is more about the journey than the destination.  A paper chain can be done when it hits a certain number of links.  But tolerance is a project you always have to keep working at” (242).

2021-07-03
Previous Post: Bea Is for Blended by Lindsey Stoddard
Next Post: We Must Not Forget by Deborah Hopkinson