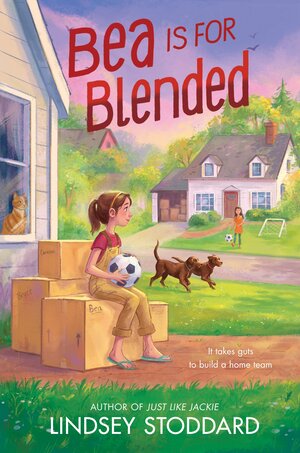 Bea Is for Blended by Lindsey Stoddard 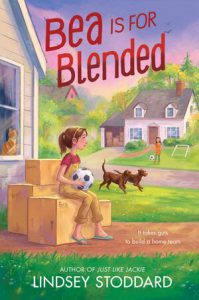 Sixth grader Bea Embers is a bright, competitive, and strong-willed girl. She and her mother have always been a team of two, but their quiet mornings eating Corn Pops and sharing the ritual of their “three things they’re grateful for, big or small” come to an abrupt end when Mom gets pregnant and decides to marry Wendell Valentine, who has three sons: Cameron, Tucker, and Bryce and multiple pets.

Her mother’s marriage also means moving away from Aunt Tam with whom they share a wall in their condominium in Vermont.  It further means not living in the same neighborhood as Maximilian, Bea’s best friend who taught her to read and doesn’t like to be hugged or called Max. Although Maximilian is uncomfortable in crowds and occasionally needs to count by eights to reduce his anxiety, he is a capable team manager whose brain is wired for numbers.

In their new house on Evergreen Road, Bea shares a wall and a birthday with Bryce. But she’s not his twin and not his sister, she insists.  Bea also has new neighbors—one of them is a soccer player named Aileyanna who wants to be called A and who played number ten on her team in Brooklyn, the same position at midfield that Bea calls hers. A (Aileyanna) wears heels and fancy clothes and wonders, “What do girls do here?”

In her mind, Bea fires back, “They prune apple trees and tap maples and learn CPR because the closest hospital is far. They wear pants that fit and sweatshirts that go over both shoulders and boots that can actually get muddy” (95).

Change is hard and blending is difficult for both Bryce and Bea. Middle school likewise presents changes. While most of those challenges are good ones, Principal Meesley is not. He favors the boys’ soccer team, makes himself unavailable, and sends negative messages about the girls’ team.

Bea Is for Blended by Lindsey Stoddard presents all these situations and more. Stoddard’s novel will likely appeal to any reader who loves soccer or who is looking for strong female characters. Moreover, it carries messages about bullying, argument writing, and bias. For example, Bea leans that “dressing weird” by wearing ribbons and high heels doesn’t negate skills nor dictate personality.

As Bea is reading The Bridge to Terabithia by Katherine Patterson, she comes to realize that in literature, as in life, there are no perfect, happy endings for everyone.  Similarly, people aren’t ever just one thing—not even bullies. As her life and relationships unfold, Bea understands that people are complicated and usually worth taking the time to get to know.  Plus, she learns that sometimes we have to ignore what other people believe and do what we know is right and good.

Like Patterson’s characters Jess and Leslie, Bea believes that life is fragile, so we need to spend it doing what we love, even if other people think we should be doing something else.  Bea accepts the value in kindness, friendships, and truth—“even the big, hard, horrible truths” (269). She additionally discovers the significance of teamwork on both the home front and the soccer field.

Besides appealing to middle-grade readers, parents and teachers will potentially appreciate this book for its message about bullying and its powerful portrayal of hearing impairment, being on the autism spectrum, and supporting accommodations for multiple other learning challenges.  All of these features make Stoddard’s novel a candidate for the Schneider Family Book Award.  It not only illustrates how literature can leave an impression but also provides ideas for teaching argument writing by demonstrating how the characters use evidence, their voices, and teamwork to fight for what’s right.  Morals about hope, teamwork, tenacity, and triumph in the face of struggle further add to the appeal of Bea Is for Blended.