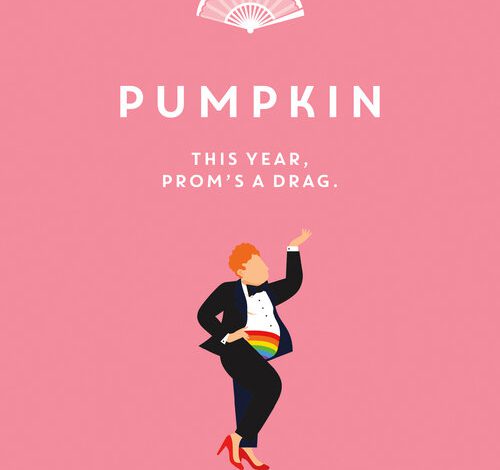 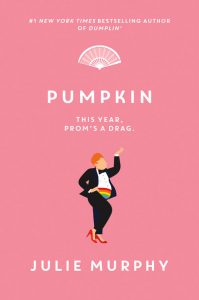 Like Jake, Reinvented by Gordon Korman, Along for the Ride by Sarah Dessen, Prom by Laurie Halse Anderson, and the Boomerang Effect by Gordon Jack, Julie Murphy invites her readers of Pumpkin to think critically about the prevailing philosophies that construct the social realities in which we all participate, sometimes without our awareness.  Murphy’s novel shares insight about the politics of high school and about the complicated dance adolescents perform between yearning for independence and basking in the comfort of not yet having to fend of themselves, of wanting to stand out and simultaneously blend in as they search for acceptance.

Waylon is a flamboyant sixteen-year-old young man with a fondness for glamour and drama. If being the poster child for the stereotypical gay male isn’t difficult enough, add being fat and tall—hulking, in fact—to the equation. Although his parents love him unconditionally, and his lesbian twin sister Clementine is his ride or die friend who gives him pep talks about his being a gift to humankind, Waylon has trouble finding his niche in Clover City, Texas.

Even though everyone in town knows he’s gay, Waylon still deals with a handful of people who hurl homophobic insults in his direction and with Bible thumpers who want to pray his gay away. Consequently, he conceals many parts of his true identity—his dreams and vulnerabilities.

When he is dumped by his love-interest, Lucas, and betrayed by Clem who decides her own post-secondary plans without her brother, Waylon is forced to realize he can be anyone he wants to be. Inventing his own reality with makeup, an eyelash curler, and a wig, Waylon tries drag and transforms into Miss Pumpkin Patch, someone who might have a few secrets of her own.

The experimental video Waylon records of himself and shows to his sister gets shared and then inadvertently posted to the internet. With prom approaching, someone persuades the student body to garner the votes needed so that Waylon is nominated as a prom queen candidate and Clem’s girlfriend, Hannah Perez, is nominated as a prom king candidate. Initially incensed and insulted at being the butt of a joke, the two decide instead to embrace their candidacy and to go out with a bang. Waylon concludes that “maybe prom queen doesn’t always have to be the same thin, pretty, popular girl. Maybe the queen doesn’t have to be a girl at all” (96). On the other hand, “what if he is always that fat gay kid with the embarrassing video who ran for prom queen?” (129).

As the conflict swirls, swells, and threatens inundation, Waylon realizes that in order to really “find himself,” he needs to spend more time “being himself.” As he builds his prom platform and continues to experiment with drag, Waylon wonders whether Pumpkin can be more than a silly nickname for a grandmother’s pudgy ginger-haired boy. In order to fully be Waylon, he realizes that he needs to let himself be Pumpkin because there is no Pumpkin without Waylon.

Influenced by his school counselor and supported by his friends, Waylon discovers that “drag is more than makeup and gowns and bodysuits and tucking and sequins and wigs. Drag is about what you exude. Drag is a choice” (235) and a real form of art.

Waylon must also contend with his feelings for Tucker Watson, whose sexual orientation and preference he can’t accurately read, as well as resolve his anger with Kyle Meeks for his perceived fat-shaming.

In the process Waylon and readers learn several key lessons, namely that

One of the most memorable morals comes from Grammy, who tells Waylon: “When the world isn’t selling what you’re looking to buy, you just have to take it upon yourself to cut your own pattern” (305).

Another benefit of reading Pumpkin comes in the critical thinking it invites surrounding the topic of prom.  Waylon seems to know that prom is “one giant charade anyway—a night where we play make-believe and pretend” (96). With all the hoopla, promposals, and apparel and decoration expenses, one wonders about the practicality of this giant illusion to feel “elegant, refined, and a little bit sexy” (96). Two questions we might ask on this subject:

When he graduates from high school, Waylon will leave behind a legacy. Exactly what that will be is for the reader to discover.

2021-06-27
Previous Post: The Lost Girl by Sangu Mandanna
Next Post: Bea Is for Blended by Lindsey Stoddard