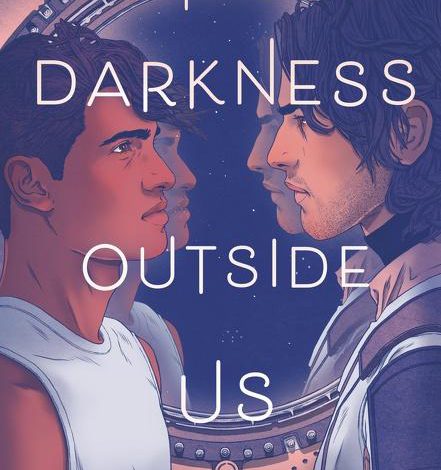 Darkness Outside Us by Eliot Schrefer 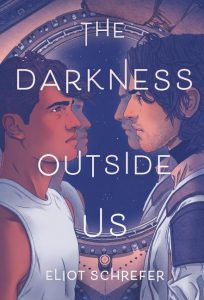 Seventeen-year-old Ambrose Cusk and another spacefarer, Kodiak Celius, are aboard the Coordinated Endeavor, a spaceship bound for Saturn’s moon Titan to rescue Ambrose’s sister, Minerva Cusk. Earth’s two remaining countries, Fédération and Dimokratía have combined their forces to accomplish this mission.

Brought together by a crisis, each young man brings his expertise and biases to the mission. Ambrose’s skills include playing the violin, programming AIs, translating computer code, and having a high awareness of his feelings.  Kodiak’s gifts are piloting, mechanical engineering, survivalism, and hand-to-hand combat. The Dimokratía space program selects its spacefarers by testing millions of children in its orphanages and determining those which have the best combination of resilience, constitution, strength, and reasoning power. Conditioned at an early age, emotional needs are driven out whenever possible.  Although they each hold parochial opinions of the others’ country, both young adults are expertly trained in the procedures of space travel.

These are the characters that readers will meet in Eliot Schrefer’s The Darkness Outside Us. Both young men soon realize that spending time alone is a fast road to crazy, so they gradually form a friendship—one that eventually bumps up against intimacy.

They also discover various anomalies that lead them to believe that the ship’s operating system (OS) is lying to them. An impossible year, blood in an impossible place that matches their own DNA, and a series of other details contradict what they thought they knew. One of the robots on board, an artificial intelligence called Rover, turns into “a little robot asshole” and even attacks them.  All of this mystery adds to the plot as the physical reality of the world begins to get flimsy.  When the two reach full awareness, they are confused about why they can’t know the truth and why they can’t be relied on to do their duty and to sacrifice themselves for their respective countries.

Under the influence of Schrefer’s pen, the reader wonders along with the two protagonists about psychological simulations, hope as a balm, and despair as capable of killing unless we find something to live for.  On this topic, Schrefer writes” “Emotions have their effects even after you try to bully them out of existence.  The intellect is not capable of overriding the wiring of the limbic brain.  You would not be the first to realize that duty and motivation are not enough to overcome the harmful effects of hopelessness,” (223).

We also marvel at certain morals—namely that we all crave control over our destinies but also that leadership sometimes looks like acceptance of adverse conditions, our enemies are sometimes inside us, and we must accept what we cannot know.

Schrefer not only calls on us to consider our true purpose or destination in life but to ask other questions: Is sarcasm the refuge of the hurt and the weak? To what degree, if any, are labels the roots of violence? What role might schismogenesis play in human relationships?

He further invites us to recognize the power of love. More than a dizzy electricity or a heightened state, love is a bonded support; it is about being “together at the bottom of a water tank” (358) and each wanting to ensure the other survives.

At its core, The Darkness Outside Us is about first love: who we pick, how we show what we feel, and how we can learn to love better.

2021-08-04
Previous Post: The Girl from the Sea by Molly Knox Ostertag
Next Post: The Block by Ben Oliver