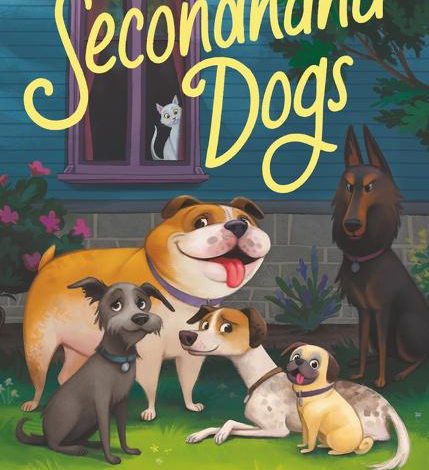 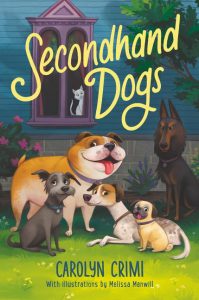 Secondhand Dogs by Carolyn Crimi is a book about dogs and humans. Eleven-year-old Quinn has lost his dad to a heart attack and his dog Murph to a vehicle accident, and now he’s losing his brother Jessie to a pack of bullies.

Craving love and attention, Quinn accepts a job with Miss Lottie, who has created a family of dogs she is giving another chance. Quinn develops into a good belly rubber and an excellent chin scratcher, beloved by the pack of rescue dogs.

When the story opens, four dogs comprise the pack. With his strength and courage, Tank is loyal and trusty—a true bulldog bodyguard.  Although afraid of things he doesn’t know, Moon Pie is a young pug famous for his ability to charm Miss Lottie into giving him his way. With her three legs, Roo is nervous and hyper; however, she is a calm and confident tracker, famous for her speed and her hunting dog sense of smell. Kind but indecisive, Gus is the leader of this pack. A terrier, he puts others first and isn’t sure what his dog gift is.

When a sleek and muscular new dog. Decker joins the pack, Gus is suspicious.  “Part shepherd, part husky, and maybe a little Doberman, too” (9), Decker smells and acts wrong. His pain keeps him alert, fierce, and strong. Soon, the pack is divided by Decker’s bullying and manipulation. Told by Decker that he is “the lowest of the low,” Moon Pie is the first to escape through a hole in the fence. Knowing the pup can’t survive on the streets prowled by a coyote, Gus and Tank escape in search of him.  Blaming himself for not fixing the hole or watching the dogs more closely, Quinn pedals the town hoping to bring the dogs back home.

However, Crimi’s middle grade novel is more than a dog story with an endearing ensemble of rescue dogs. It is about the effects of hurt and sadness. Although Quinn wants to keep the memory of his dad alive, his mother and brother refuse to talk about him or about Murph, “as if their memories were like the old photo albums they had tucked away in the basement” (76). Eventually, Quinn “locks away everything he knew about Life Before in a special place in his brain, like a bureau with a secret drawer” (76). This loss festers into a wound that requires treatment–a treatment Quinn finds when he finds the strength to stand up to his brother and his bullying friends.

This beast fable also teaches a lesson about sadness.  Not only do readers learn that being sad is okay but that sadness has the power to make us stronger. Gus’ sadness makes him stronger because once he finds happiness again, he realizes sadness is something we can survive. Quinn, too, must find hope and trust again.

Crimi’s book draws an analogy from dogs to humans. Just as all dogs are different, people, too, can be touchy or mistrusting, which can make them nippy. Some have led tough lives and are wary of newcomers. Others need different forms of love and acceptance. The book’s short chapters and illustrations are joined by revolving perspectives and clever flashbacks in which each character’s “before story” is told to create a quick and heart-warming read.