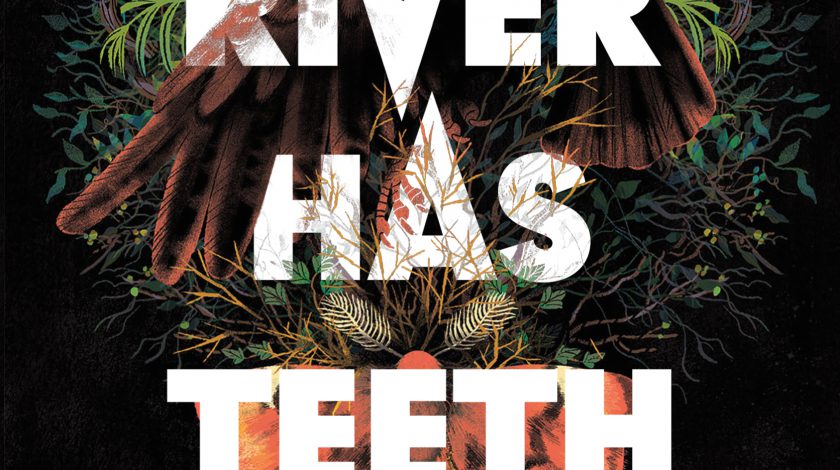 The River Has Teeth by Erica Waters 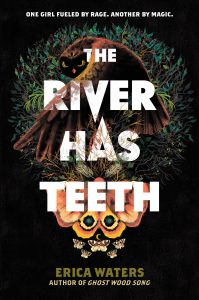 With its first line: “The prison is always quiet but never still,” I suspected The River Has Teeth would be suspenseful and riveting. Erica Waters did not disappoint.  Her novel joins the ranks of good psychological crime thrillers like Silence of the Lambs or the television series Criminal Minds.

Besides the main plot thread of girls going missing in The Bend and the mystery of who is murdering them, the book carries several other threads to keep the reader engaged. One thread follows Della Lloyd and her family’s magic, murders, and infinite crimes in brewing potions for customers with vengeful thoughts. The Lloyds live in a run-down house in hillbilly country near a nature preserve in Tennessee where family recipes are brewed into spells for healing or cursing.  The Lloyd magic is tied to the land; however, something has upset the balance, and the magic slips out of bounds. One of the spells gone “wrong” affects the behavior of Ruby Lloyd, Della’s mother.  Now, Della—who can work magic with anything that grows beneath the soil, is intent on protecting her mother who has transformed into a river siren—a half-feral creature that is more monster than human. Could she also be a serial killer?

Another thread takes up the story of Natasha Greymont, a bisexual fencer who wants revenge for her sister’s murder. Her anger burns like a wildfire inside her that she wants to unleash. Her search for power leads her to Della. When Natasha is in Wood Thrush Nature Park, the woods feel alive, like a breathing, thinking, watching being. For a girl who has always believed the “only magic we get is the magic we make for ourselves—the lives we choose and build and fight for” (57), this sensation unnerves her. “My head says I’m an idiot for even thinking about it, but my gut says there might be more to this world than I’ve ever imagined” (57-58). Her search for answers leads her to Della, who agrees to help Natasha learn magic.

As the two girls with such different backgrounds work together to solve their mysteries, they develop a bond. Beside Della—physically strong with contoured muscles and competence in the woods—Natasha feels powerless and impotent. Della refers to her as princess, a rich person who thinks she’s entitled to everything. Yet, the two find a magic of their own.

In the process of weaving these threads into a story, Waters adds color to her tapestry with various morals. These include Della’s assessment that humans have a tendency to “pass blame” onto an easy target.  Instead of accepting responsibility for being vengeful people, the people of Fawney call the Lloyd family vengeance witches; it’s “easier to call us evil, hateful devils” (42) than to admit responsibility. Then, there’s Margo’s statement: “Feeling guilty about something and being responsible for something aren’t the same. And I suggest you learn the difference” (190).

The River Has Teeth also proposes a new perspective on magic—as a force or power having a little mystery and requiring faith and intention. We accomplish something with focus and intention. “Intention is everything. You have to know what you’re trying to accomplish,” Della tells Natasha. Waters also suggests that magic is tied to emotion and that we need to learn to control it. Magic responds to our own needs and desires and gifts; it demands not only that we listen and pay attention but that we know who we are and what we want. Like the distillation process in making liquor, intention is comparable to fermentation: “You add human desire to that magic to activate it. And then you draw out the liquor of the magic,” (327).  And like the grief of losing a family member, magic is something we just can’t understand until we experience it first-hand.

Waters employs another analogy to hint at a power that often eludes us–that which comes from song and music. She explores song as a container for emotion and how we can sing something into being or use music as a tool for communication.

A sub-theme in the book addresses systemic marginalization and how the police try harder for girls like Natasha’s sister Rochelle—white and from a wealthy background. Georgia’s friend Lena—because she was Black and poor—didn’t get police organized search parties, and her status as missing didn’t make the news. The only people who looked for her were her family and her church.

As a film artist, Georgia hopes to use her art to fight “for all the girls who are missing. For Black trans women. For native and Indigenous women” (257). With her best friend, Natasha, Georgia wants to give voice to the voiceless and to show the world that women want a sense of control in this brutal world and the weapons “to wield against a world that thinks women’s bodies are disposable, that their wills are weak” (389). Together, Georgia and Natasha vow to “give ‘em hell,” and Della will teach Natasha to speak the words that will bring protection and healing.