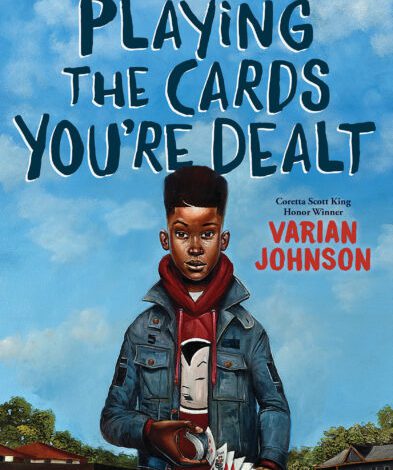 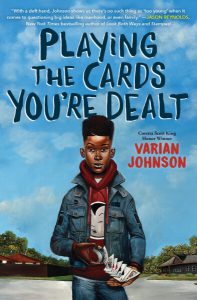 Fifth grader Anthony Joplin, aka Ant, is afraid of confrontation but confident in his card playing skills and kind to his friends. He is also trying to discover where and how he fits into the “tough guy” image and whether he can “be a lion,” as Jamal’s brother Taj says.

Ant is further confused by girls, in particular, Shirley Heyward. How she smiles, talks, and laughs makes Ant’s skin tingle. “Ant doesn’t know what was prettier—Shirley’s smile, her brown fingers as they worked the deck, or the sound of the cards as she made a perfect shuffle” (193).

Now that Ant’s older brother Aaron is attending a boarding school, Ant is left alone to run interference at home when his dad starts drinking and gambling. Because he wants his dad’s approval, Ant agrees to keep his dad’s secrets. When things get really bad, Yolanda discovers the truth and kicks her husband out of the house. Now what is Ant to do? How will he get the look his dad had given Aaron when he won the spades tournament, “the one that made it seem like he was going to burst because he was so happy, so proud of his kid” (229)?

Set in South Carolina, Playing the Cards You’re Dealt is a middle grade novel by Varian Johnson. Besides sharing the conflict of coping with an alcoholic and gambling parent, the novel imparts several important lessons about heroism and masculinity as constructs. Aaron tells his younger brother: “There’s nothing wrong with showing emotion. Or admitting when you’re in over your head. Or even asking for help” (271). These traits don’t identify weakness, any more than apologizing or backing down do. In fact, sometimes the lessons that are passed down to us aren’t always the right ones.

In addition, Johnson utilizes several references to card games and creates analogies that reveal their similarity to life. Both life and spades are part strategy and part luck with risks and rewards and rules that can be hard to follow. And sometimes the deck can feel stacked against the player.  As Ant learns these lessons, he also accepts that he is brave, strong, and clever. Even though there are no do-overs in life, “no reshuffles or take-backs” (310), Ant discovers that he can be unbeatable if he plays to his strengths and powers through hard situations.

2021-12-13
Previous Post: Lies My Memory Told Me by Sacha Wunsch
Next Post: Color of Dragons by R.A. Salvatore