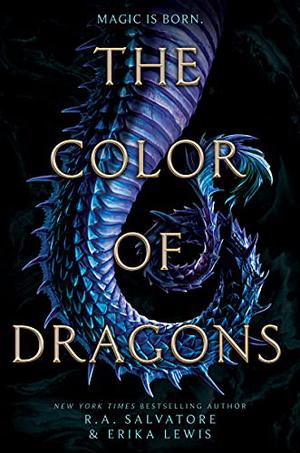 Color of Dragons by R.A. Salvatore 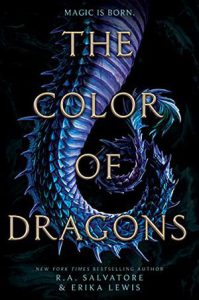 A magical and enchanting tale of adventure, The Color of Dragons by R.A. Salvatore and Erika Lewis will likely intrigue readers of Christopher Paolini or Anne McCaffrey.

Besides a story about finding one’s self, Salvatore and Lewis tell a story about love, loyalty, and other things worth fighting for. Seventeen-year-old Maggie and Griffin are both orphans trying to find their place in the world. Just as Griffin must decide if his place is with the corpulent and greedy King Umbert serving as his champion: “Sir Griffin, the mighty Draignoch Slayer” (92), Maggie must determine whether she owes allegiance to Xavier, the magician and perhaps the Ambrosius who rescued her and now acts as a father figure.

The paths of the two teens cross when Maggie is brought to the Walled City where she is shocked to see the disparity in the living conditions for residents of the Top, Middle, and Bottom. She is equally appalled at the treatment of the creatures that  are sacrificed in the arena for the King’s entertainment. Furthermore, Maggie senses a connection with one of the dragons, whom she calls Rendicryss. Although Rendicryss is being kept in a phantombronze cage—impenetrable by anything but magic, Maggie is determined to rescue Rendicryss. Before she can carry out her plan, however, she has to learn how to harness her magical abilities, as well as to overcome the multiple obstacles that stand in her path.

Together, Maggie and Griffin discover that when you have a talent, there’s always someone coming for you, believing they can do it better. As they navigate their initial mistrust for one another, Maggie and Griffin begin to question their loyalties as well as the intentions of others.  They also realize that true friends can be like family—those who are willing to do things for you without expecting anything in return. Likewise, they discover that a dying man’s last words are always of faith “because a dying man’s last deeds are righteous” (395).

The Color of Dragons is a fast-paced story with twists and surprises that add to the plot. Readers will likely be sickened and intrigued in equal measure with this pre-Arthurian tale of the origins of magic.