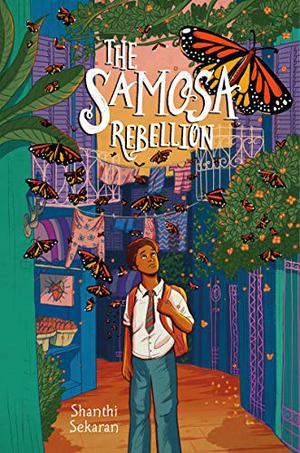 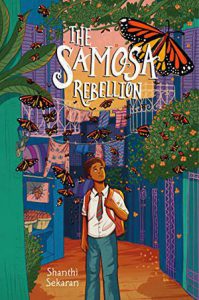 Set in the fictional country of Mariposa, The Samosa Rebellion by Shanthi Sekaran tells the story of several twelve-year-old middle schoolers who attend Marble Hill Preparatory (MHP) Academy.  When Muki Krishnan spots Dragonflies—a type of spy drone—monitoring the neighborhood of Oceanview and suddenly hears people talking about moths versus butterflies, he knows strange things are afoot, so he is glad to have his best friend Fabi Calderón by his side. Fabi is smart, funny, genuine, great at soccer, and immune to what the world thinks.

Unlike Tinley Schaedler and others whose families have ancestors from Mariposa, the two friends are on scholarship to attend MHP, so they ride the subway to school. According to Muki, kids from Oceanview have three ways to survive at MHP: Be funny, be good at sports, or blend in. Muki’s survival strategy of choice is to “Blend in. Press mute. Disappear” (13).

In civics class, however, Miss Pistachio insists that all of her students participate and encourages them to find their voices. When she pairs her students for a four-week project on their country, Muki finds himself partnered with Tinley, who “strides down the halls of MHP like a queen, her friends trailing behind like court attendants” (15).

Muki calls his power to blend in, to get along with everyone, and to adopt a go-with-the-flow attitude an anti-power. “An anti-power is a good quality that can sometimes be bad for you” (37) and land you in sticky situations or make things difficult. As the two sixth graders work on their project—which they decide will be about butterflies (Mariposa is Spanish for butterfly, after all)—they visit one another’s homes and learn more about cultural differences. When Muki’s mother finds out that Tinley is the daughter of General Dogwood Schaedler, she bans the girl from her home on the grounds that Tinley “has a very dangerous father” (47).

General Schaedler serves under President Bamberger who believes that Mariposa is being overrun by immigrants. Bamberger invents the labels Butterfly to refer to all native Mariposans and Moth to refer to all outsiders. By Bamberger’s definition, Muki’s family, who has been in the country for fifteen years, are still considered moths. With his removal plan, he intends to detain in camps those residents who will be sent to ally countries from Mariposa.

Suddenly, the notion of who is a Moth and who is a Butterfly occupies Muki’s mind. When his parents begin to speak in code: Eyes Open, and to talk in riddles and tell secrets, Muki demands to know what is happening. He learns that his mother, Sindu, is the leader of a resistance movement meant to alert and mobilize the Moths against any government attempt to pull this country apart. From this new reality, Muki realizes that this rebellion isn’t happening on a battlefield with cannons but at home in the kitchens of Oceanview.

Not only an insightful book about what it means to belong and to defend one’s rights against injustice, The Samosa Rebellion is also about a loss of innocence. Muki learns the sad fact that there are adults in the world who want to label, divide, and send away any outsiders—adults who see difference and danger and not much else. However, readers will also grow aware that there are young people in the world—like Muki—who make the right thing impossible to ignore. Muki makes the world open their eyes—oculi aperti.

The novel also carries multiple morals—that if we “don’t say what we know is true, we may as well be lying” (190). After all, silence leads to ignorance, intolerance, and sometimes even violence.

Another truth comes in knowing that the sins of the parents are not the fault of their children. And perhaps children make the best revolutionaries “because rebellion runs in their veins. [They] have crazy ideas that sometimes actually work” (328). However, Muki also has to accept that “big changes mean that some things go away forever” (329).

In addition to these plot points and morals, Sekaran’s book shares multiple facts about butterflies that enrich the story’s telling.