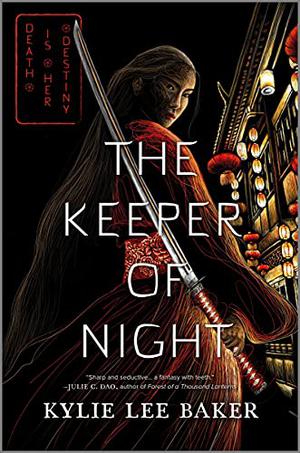 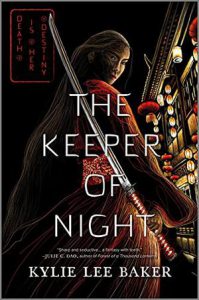 Dark, gruesome, and captivating, The Keeper of Night by Kylie Lee Baker is Book One in a planned duology. In this first installment, Baker writes the story of an angry biracial girl—Ren Scarborough—who is trying to find out where she belongs. This feeling of being half and not whole, as well as the label foreigner haunts Ren, following her from London, England, where she serves as a Reaper, to Japan where Ren was born a Shinigami.

In both roles, Ren, who is a descendent of darkness—made not of flesh and blood but of Death and Time—works for Death. This servitude is supposed to be sacred, a task that all of Death’s servants execute to keep the universe in balance. The only blessing in Ren’s life is her half-brother Neven, whom Ren calls “the Patron Saint of Mercy.” Neven is a kind and sensitive soul with a strong moral compass, while Ren is vengeful and prone to selfishness. Despite the trauma that she has endured, Ren does occasionally glimpse beauty: “Just like every human life, souls were unique and beautiful for a single moment, and then they were nothing but dust” (11).

Damaged by being abandoned by her mother and largely ignored by her father, Ren is determined to find acceptance and belonging. So, she decides to leave London with her brother, whom she vows to keep safe from the darkness. However, up to this point, Ren’s life was spent learning new languages and reading poetry, not devising escape plans.

Once in Japan, she must complete a task for Izanami, the Goddess of Death, and find her mother so that she can secure her place as a Shinigami and build a home for herself and her brother in Yomi–the World of Darkness. Izanami tasks Ren with killing three Yokai. A dmoted Shinigami who is currently serving as a fishing spirit, Hiro, agrees to help Ren with her mission.  Neven largely opposes Hiro on the basis of distrust.  Still, Hiro tells Ren, “Most Yokai are not easy to kill. To destroy them, you have to destoy whatever gives them their essence” (180).

Readers accompany the trio on their torturous journey, encountering not only Yokai but learning of other Japanese customs, creatures, and legends. Together, we learn that innocuous creatures have far less entertainment value than the dangerous ones. We also learn that we all resist the judgment of others and yearn for kinship and a sense of belonging.

Ultimately, The Keeper of the Night is a tale that teaches the grave consequences of greed and selfishness and the truth that we all have terrible parts.

2021-12-26
Previous Post: Samosa Rebellion by Shanthi Sekaran
Next Post: Everything Within and In Between by Nikki Barthelmess