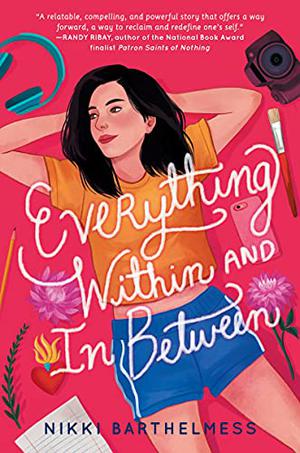 Everything Within and In Between by Nikki Barthelmess 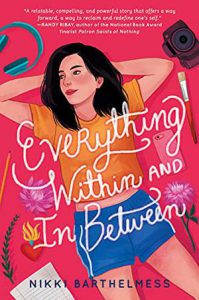 Having been raised by her grandparents, Maria (Ri) Fernández has a lot of questions: Why did her mother abandon her? Why is Grandma so cold to their Mexican American neighbors? Why doesn’t the family speak Spanish? Why is Grandma keeping secrets?

Wishing to “be enough” in Grandma’s eyes and yearning to study journalism and become a writer—not the doctor or engineer that Grandma wants—Ri feels like an outsider in her own life.  She is tired of everyone else telling her what’s best for her without regard for what she wants. Estranged from her Mexican identity—mostly due to her grandmother’s insistence about the sacrifices she has had to make in the name of practicality and because they’re American now—Ri signs up for Spanish, begins to make new friends, and considers Grandma a liar. At the same time, she admires Grandma for being so hard-working.

In that friend-building process, Ri suddenly grows acutely aware of microaggressions and calls out her best friend Brittany, threatening to isolate one of her strongest allies. On this rebellious path, Ri also encounters and experiments with some of the shady behavior that Grandma has warned her about. Furthermore, she not only discovers that her mother is living in the nearby town of Oxnard but that Grandma wants the fair-skinned Maria to be white-passing.

Readers will likely appreciate Everything Within and In Between by Nikki Barthelmess for its relatability. We all desire acceptance as we search for belonging. Along the way, the novel teaches two especially important morals. First, with regards to racism and stereotyping, we can’t expect people to be better if we don’t tell them. Silence makes us complicit. Moreover, because of our own insecurities and assumptions, we will have some unlearning to do.

Although this is a novel about self-discovery and intergenerational cultural dynamics, it is also about healing from the scars of trauma. The characters that Barthelmess creates are complex and well-drawn.

2021-12-30
Previous Post: Keeper of Night by Kylie Lee Baker
Next Post: Black Birds in the Sky by Brandy Colbert