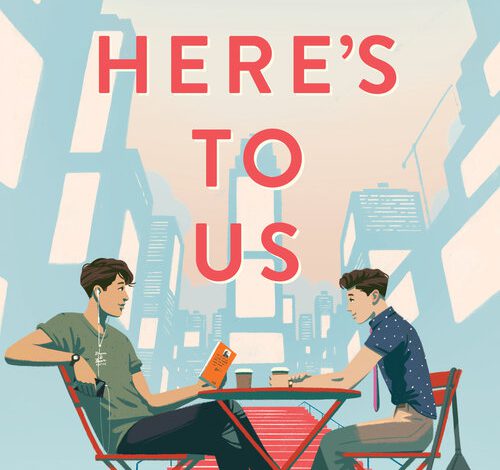 Here’s to Us by Becky Albertalli and Adam Silvera 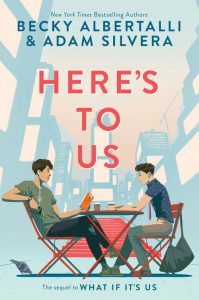 Two gay couples are navigating relationships in Here’s to Us. This romantic comedy is the collaborative effort of Becky Albertalli and Adam Silvera. Couple number one is Mario Colón and Ben Alejo—two white-passing Puerto Ricans who bond over their work as writers. Ben loves connecting with people over words and aspires to publish his fantasy, The Wicked Wizard War. Mario, who writes television episodes, is blush-worthy beautiful, highly energetic, and affectionate. Whenever this world bores him, Ben escapes into writing where he creates his own reality.

Couple number two is Mickey McCowan and Arthur Seuss. Mikey is a beacon of order and symmetry, while Arthur is working his dream job as an intern to the director’s assistant in New York City.

All four are college-age and building their futures, but Arthur and Ben also have a past as ex-boyfriends. Although they vow to power forward, instead of worrying about bumping into their pasts, the universe has other ideas.

Another thread in the novel features Dylan and Samantha, a couple who has decided to take their relationship to the next level. A friend of both Ben and Arthur, Dylan is highly distractable but loyal and funny. He provides much of the novel’s comic relief.

Besides the relationship conflicts and the multiple morals surrounding them, Albertalli and Silvera share other life lessons, as well. For example, whether we’re writing or trying to please others, we have to accept that we can’t please everyone, so our best is good enough. Furthermore, speaking Spanish (or any other ethnic language) doesn’t make a person any more or less “official” in that ethnicity.

Even though it takes time for the young adults to reach understanding, they finally realize that priorities shifts, feelings change, and interests evolve.  Other key take-aways include that we are the protagonists in our own life stories and can revise for a better ending and that sometimes happily ever afters aren’t about happiness at all.