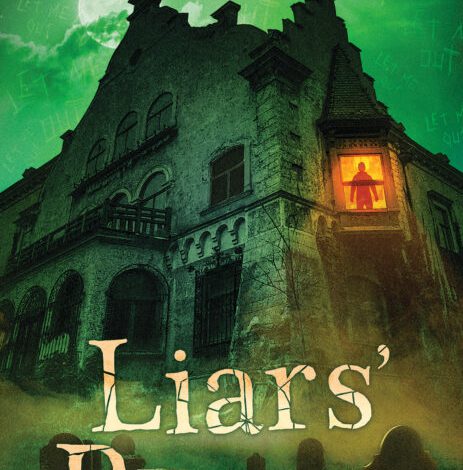 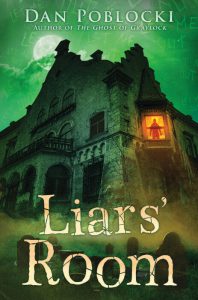 Anyone who likes a good ghost story will likely enjoy Dan Poblocki’s newest novel for middle grade readers, Liars’ Room. The twelve-year-old Hill twins, Stella and Alex have moved to the country in Frost Valley, New York, with their mother and her new husband, Charlie Kidd. Charlie’s ten-year-old son Simon is now part of the family, although Simon’s older brother Zachary had to stay behind in Ohio because of some trouble he encountered.

A lover of scary things and scary stories, Simon is prone to exaggeration and seeks attention. So, when he concocts a story about ghosts, neither Stella nor Alex are inclined to believe him. Before long, however, strange things begin happening at Wildwyck, the property the family acquired as an investment with hopes of converting the former troubled boys’ school into upscale town houses.

At Frost Valley Middle School, the students aren’t especially warm and welcoming of the twins. Even though Simon makes friends easily, the only friend that Stella and Alex find is Gordon Weinberger, who is somewhat suspicious. Between the rifts at home and those at school, any hope for family ties begins to ravel as the siblings grow to resent one another.

Eventually, Alex and Stella decide to beat Simon at his own game. When their prank backfires, they find themselves grounded. With parental trust eroding and doubts forming about truth and fabrication, a schism begins to form in the twins’ relationship, as well. Who can really be trusted and who is telling the truth about the ghosts at Wildwyck?

As the legends of Wildwyck take on more power, the twins decide the best antidote is information. “What if we try to figure out what really happened at Wildwyck? Learn its history? I think it might help make this place feel, like . . . normal? It could be like turning on all the lights at night. The more we know, the more we see. The less creeped out we are” (88). However, uncovering truths only leads to more fear, tension, and trouble.

As a plot twist, Poblocki adds excerpts from Zachary’s journal. These complicate the novel’s ending, leaving the reader wondering what to believe.

Despite the mystery, this novel will leave tweens with some key lessons: