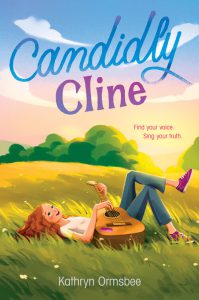 Set in Paris, Kentucky, Candidly Cline by Kathryn Ormsbee is a queer coming-of-age story about Cline Louise Alden. Alden ladies have music in their marrow, and according to Cline’s Gram, music is medicine. Thirteen-year-old Cline, who plays her secondhand guitar with finesse, imagines herself in Nashville singing her heart out at the Ryman Auditorium, home of the Grand Ole Opry. If knowing better means keeping quiet when a good song is on the radio, Cline is happy to remain ignorant.  For as long as she can remember, she has dreamed of making it big as a singer/songwriter.

Cline gets the chance to be noticed for her musical talent when a waitress at the Goldenrod Diner, where her mother also works, gives her a flyer about a Young Singer-Songwriter Workshop at the University of Kentucky. When Cline asks her mother’s permission to attend and even gets a job to pay for the fees since money is tight with all the bills to pay and Gram’s medication costs to cover, Judy Alden refuses to consider it.  Calling music an impractical profession since it doesn’t pay the bills, Mom explains that she doesn’t want her daughter to live the life of a penniless artist.

Taking inspiration from the strong women in country music and their rebel words, Cline finds a way to attend the workshop, despite her mother’s disapproval. But her methods depend on deception. When her mother discovers her daughter’s deceit, Cline is devasted by the mother’s reaction.

After a series of additional conflicts—not the least of which involves Cline’s attraction to other girls and a crush that develops with her workshop collaborator, Sylvie Sharpe—the plot finds resolution. Along the way, the reader will learn several key lessons. Among those morals is that most of us keep parts of ourselves hidden so as not to risk rejection. Cline wants to stand out for her music, not for a part of herself, like her sexuality, that she can’t change. After Cline experiences rejection by her best friend Hollie Kendall, who calls her “not normal” and considers her crushing on girls sinful, it takes the support of an advocate like Mrs. Yune to convince her that she’s perfect the way she is and to encourage her to chase her dream.

Cline’s dilemmas and struggles for acceptance might inspire other young people to be confident in who they are rather than allowing the judgment of others to deter them. Ormsbee invites her readers to give critical thought to the one-size-fits-all fallacy and to umbrella thinking, like “every girl likes those boys.” As Cline says, “Who gets to decide what every girl wants? Is there a committee. . . a set of judges who hand out trophies and determine the rules?” (114). We all have to decide for ourselves what we allow others to intimidate out of us—whether we give them that kind of power over us. As Delia tells Cline, “I think you should be able to choose who hears your story. . . . If someone’s not worthy of hearing that story, well . . . that’s for you to decide. No one else” (233).

From Delia, Cline also realizes that people are afraid of what’s new to them; they don’t like feeling uncomfortable. When we present ourselves fully and truly, others might experience discomfort, but we can’t run from those moments. “Just acquaint yourself with that discomfort for a while,” Delia tells Cline. “If you do, you might learn a thing or two. And you might find it’s refreshing to be honest with yourself. Perfectly candid” (235). After all, we can’t control how anyone else will react. Maybe they will accept us; maybe they won’t. But it’s not our job to make anyone happy. It’s only our job to be honest with ourselves and to be our best selves.

Another important message to come from Ormsbee’s novel is that about risks. Life is made of risks—those opportunities ripe with possibility and fear. Sure, bad things can happen when we take risks, but good things can happen, too. The key is to make calculated risks and to have a safety net—like that provided by a parent, a grandparent, a college professor, a friend, or a trusted confidante. All of us need a Greta Thunberg-like Sylvie to stretch our thinking, a Gram who believes in us, and a fairy god-mother figure like Mrs. Yune.

Finally, this book is about the power of art—in this case music. Like a religion, music enables Cline to touch something beautiful and bigger than she is. Cline believes that people live on in stories and melodies. And in Gram’s words, music “can take your broken, bruised spirits and heal ‘em right up” (30).

2022-04-22
Previous Post: Messy Roots: A Graphic Memoir of a Wuhanese American by Laura Gao
Next Post: Storm by Nicola Skinner