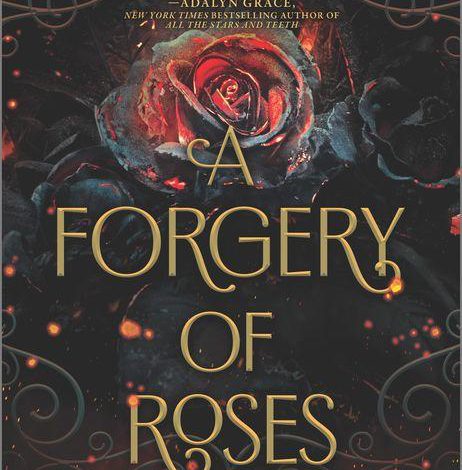 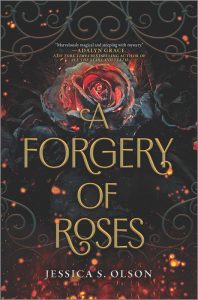 A Forgery of Roses by Jessica S. Olson is a fascinating book about two sisters: Myra, a seventeen-year-old painter with dreams of securing a full-ride scholarship to the Conservatory for Music and the Arts; and Lucy, a thirteen-year-old aspiring biologist who hopes to improve the environment, save endangered animals, and change the world with her discoveries.

With the sudden disappearance of both their mother and father, Myra’s whole world unravels. Abandoned and without resources, the two Whitlock girls can scarcely afford food and rent, let alone the medical care Lucy needs as her illness worsens. A prisoner of guilt and loneliness, Myra doesn’t know how to make things right again.

When the governor’s wife approaches Myra with a commission for a painting, Mrs. Harris confides that she knows Myra possesses Prodigy magic, which gives the painter the ability to alter human and animal bodies with their paintings. Although ladyrose gel—made from the petals of crimson roses—is not necessary to wield Prodigy magic, Myra’s powers are stronger when paired with it. Mrs. Harris offers Myra a half a million gold pieces to paint her son, Wilburt Harris, Jr. back to life. The temptation is beyond Myra’s ability to resist, just as trust is a luxury for the wealthy, the secure, and the loved.

Soon, Myra is caught up in the mystery of Will Harris’ death—which looks more like a murder than the fall that she has been told killed him. After all, why would a boy afraid of heights be sitting on the balcony from which he could fall to his death?

With the help of Will’s older brother, August, Myra tries to unlock the puzzle that holds her life and that of her sister in its balance. A writer of poetry, August is socially awkward and not good with people, although he is thoughtful, quiet, and gentle. When Myra finds herself attracted to August, she admonishes herself as not belonging to the “fine silk world” of August Harris, the firstborn son of the Governor of Lalverton.

The plot grows convoluted as August and Myra search for clues and follow the peculiar behavior of certain characters. One character, Vincent is particularly mysterious. Passionate and precise, confident and charming, Vincent is the forger who was commissioned to produce papers for the governor, stating Will’s cause of death. Did the Governor kill his own son?

After Vincent commissions Myra to paint his portrait, the two spend multiple hours together. The more Vincent talks, the more Myra can see how he has become so successful at such a young age. In many ways, his remarkable brilliance reminds Myra of Lucy. Vincent’s own warning, though, gives Myra pause: “Even the most innocent people have lies percolating beneath their skin, things they would pay to keep others quiet about” (228).

The mystery swirls as the reader attempts to grasp who is innocent and who is guilty. Besides its mystery elements, Olson’s novel shares multiple morals. Perhaps one of the most significant occurs during a conversation between Myra and August: “You are not weak because you are not stone,” Myra says on page 192. Through her speech, readers recognize that we often believe what others tell us about ourselves when, in fact, we should find contentment in who we are. We do not need to apologize for the things that make us different, nor should we have to pretend to be someone we’re not. After all, “being kind is much more important than being able to give impressive speeches, and creativity is a sign of a brilliant mind. . . . I’ve known you for only a couple of days, but even in that short amount of time, I haven’t seen a failure. I’ve seen a strong, determined man. One who cares deeply and loves fiercely even when those he cares for and loves treat him poorly” (193).

Another thread of Olson’s story follows the notion of magic. In turn, Olson questions whether magic comes from faith, love, or art. Before Myra was aware of her magic, she considered painting magic. “Art holds magic. It captures how it feels to be alive, with all its aches and sorrows and joys” (123). Likewise, when creating art, Myra experiences the sensation of imbuing life into her work.

Additional minor morals occur at moments in the text:

Despite being all of these things, Olson’s novel ultimately shares Myra’s story— her fierce loyalty, her desperation to help her sister, and her unyielding desire to control the uncontrollable. Myra’s signature epiphany occurs when she realizes that she has spent her whole life “striving for perfection, running [herself] into the ground searching for how to make things right, how to control every outcome, every moment. But maybe perfection does not mean there aren’t things we wish were different. Maybe perfection comes from leaning into the things that we have to fight for because those are the things that bind us to the people worth keeping” (369).

2022-03-23
Previous Post: Why Would I Lie? by Adi Rule
Next Post: Turtle of Michigan by Naomi Shihab Nye