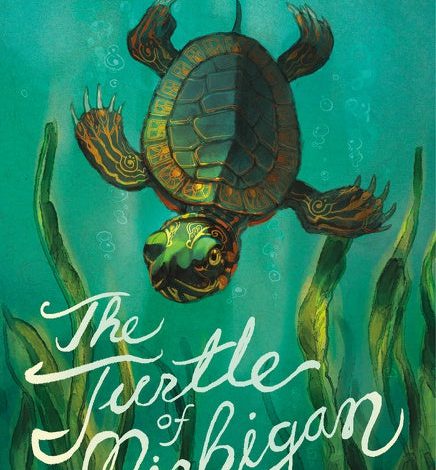 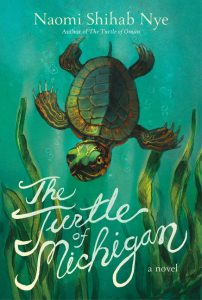 Color, detailed imagery, melodious prose, and the idea that “trees hold their stories in their bark and their leaves” (186) are all tell-tale signs that The Turtle of Michigan was written by a poet. Naomi Shihab Nye shares the story of eight-year-old Aref who initially experiences worry, anger, and loneliness at the thought of leaving Oman. Yet those feelings are replaced by excitement, relief, and adventure at this new chapter in his life. On his way to the United States, Aref discovers the mysterious world of airplanes and air ports where “musical voices and delicious accents float on the air” (30).

Set in both Muscat, Oman, and Ann Arbor, Michigan, The Turtle of Michigan is at once the story of how “feeling strange can make us more creative” (203) and how “doing new things is good for the brain” (308). As she explores the meaning of home, Nye pens the story of both Sidi, Aref’s grandfather, and Aref himself. In the process, Nye’s novel for middle grade readers swirls with a multitude of smells, flavors, colors, sounds, and sensations—sending a message about living in an international world and the wonder of diversity.

A lover of turtles and a specialist in noting unusual details, Aref’s favorite hobby is keeping notes and lists. He longs to share his new-found discoveries with Sidi. Back in Oman, Sidi struggles to find happiness in the absence of his family.

Along with the story of these two individuals, Nye weaves a social justice message. It begins when Aref’s father—a student of biology and a researcher—tells his son: “You never laugh at people for things they don’t know” (154).  And there is much that Aref’s classmates do not know, such as how to pronounce his name and whether the country of Oman is really a place. Likewise, there is much that Aref does not know—such as about Polish doughnuts called paczki or the meaning of English idioms like breaking the ice or getting your brain rolling.

That thread continues in the description of the anti-bullying club run by the first graders at Dr. Martin Luther King, Jr. Elementary School. Along with Aref, readers will learn terms like reconciliation, restorative justice, and mediation.

With themes of immigration, family, identity, and a sense of belonging, The Turtle of Michigan opens readers to experiencing the world in all of its poetic beauty. Nye also implies that a word like tolerance—with its connotations about parochial reluctance and smug righteousness—should be replaced by speaking about mutual understanding and mutual respect. Readers might also learn a thing or two about Michigan turtles!