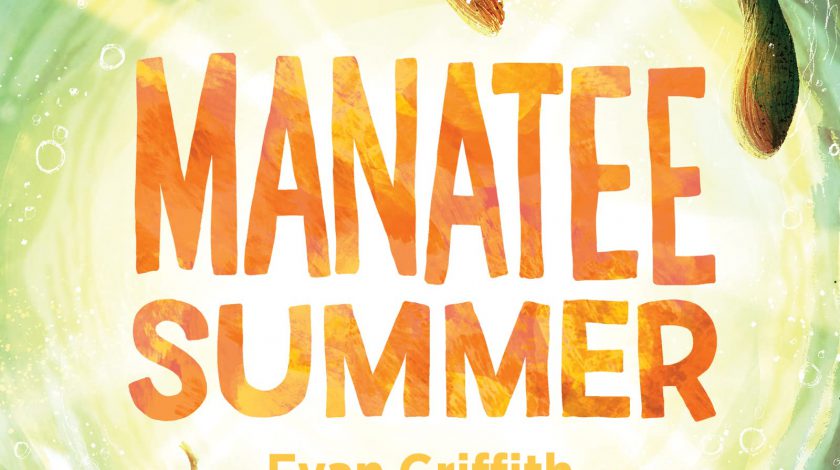 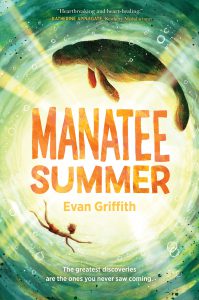 Readers of Carl Hiaasen, Sneed Collard, and Laurie Halse Anderson’s Vet Volunteers series will likely be drawn to Evan Griffith’s debut novel for middle grade readers, Manatee Summer. Griffith tells the story of Peter Harrison and Tommy Saunders, two Florida youth who will enter sixth grade in the fall. The pair plans to spend their summer completing their Discovery Journal, a project that they began two years ago in which they catalog every animal species they see in the wild. Each discovery in the two hundred-page journal gets two pages. On one, Tommy records research notes; on another, Peter draws pictures.

These two lovers of animals have adopted code names, which they use to communicate on their walkie-talkies. Tommy is Fox and Peter is Falcon—apt nicknames for a wicked-smart researcher and a courageous, ambitious visionary.  When the pair discover a manatee, their interest in this species escalates. They even name one of the creatures, Zoe. The kinship is compounded by stories that Peter’s grandfather has told about his own manatee experiences. Now Papa has Alzheimer’s and often gets confused, agitated, or forgetful. However, out of shame, embarrassment, and fear, Peter won’t tell his best friend about Papa—hoping that he can perform in his Official Caretaker Duties as the best and help Papa get better.

As an escape from this pressure, time spent with Zoe brings Peter a sense of peace. Whenever he’s with Zoe, a stillness washes over him, and the stories he tells Papa about Zoe have a similar calming effect. Papa talks of going to see Zoe and of building a Marvelous Manatee Sanctuary.

When Zoe gets injured by a motor boat’s propeller, Peter blames his arch-nemesis, Mr. Reilly. Whether the injury is the bully’s fault or not, Zoe is taken to the Emerald Springs Sanctuary for injured animals. Grief-stricken, Peter vows to work not only to save Zoe but to save the West Indian manatees.  On his mission, Peter finds a kindred spirit in Cassidy Cawley, who works for the Florida Manatee Society. According to Cassidy, the manatees can’t be allowed to go extinct because they are part of Florida’s coastal ecosystem, and “when one species disappears, it has a ripple effect on every other species on the planet. Including us” (129).

But as things sometimes do, Peter’s world begins to spin out of control. He not only learns that his friend Tommy will be moving to Michigan but begins to believe he’s not “strong enough to pull [Papa] out of the labyrinth in his mind” (177). Peter begins to doubt his ability altogether. “I thought I could do everything this summer. I thought I could finish the Discovery Journal, and thwart Mr. Reilly, and save the manatees, and take care of Papa, and keep Tommy, and maybe change the world along the way. But I couldn’t do any of it” (189).

Ultimately, Griffith’s book helps young readers realize that because the world is scary-big, they have to commit to breaking it into manageable moments and accept that they can’t control everything.  Young readers will also learn that how they act and who they are not necessarily the same. For instance, just because you’ve baked a cake, doesn’t make you a baker any more than acting like a jerk brands you as a jerk.

From this story that is both heartbreaking and heart-healing, all readers will recognize the value of setting goals and having reasonable expectations for ourselves and others.