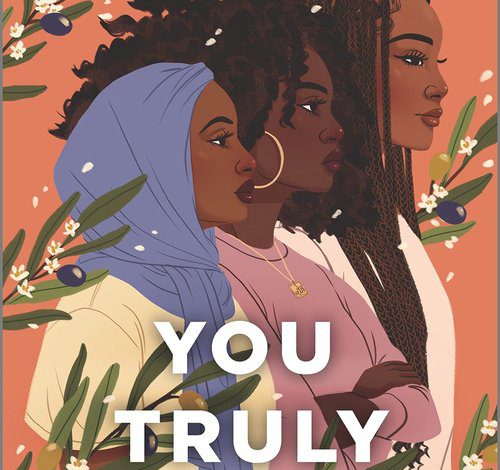 You Truly Assumed by Laila Sabreen 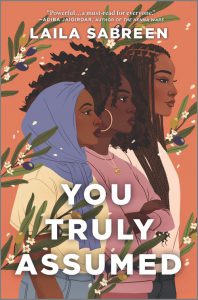 A young, Black Muslim woman living in Abington, Virginia, Sabriya (Bri) Siddiq revels in the feeling of control she has during ballet and dreams of reaching the American Ballet Theater.  When a terrorist attack happens at Union Station in Washington, D.C., all plans come to a halt. Hakeem Waters is the alleged terrorist, and with that name, people immediately assume that he’s Muslim. Soon, hate crimes are on the rise and Muslims across the country are targets.

As a method of release, Bri starts blogging in what she believes is a private online journal that turns out to be public because of a setting oversight. Her words give representation to others who have felt unheard and unseen, and so “You Truly Assumed” is born.

The blog provides a forum for young Muslim women and is run by three young Muslims when Farah and Zakat join the admin team. Farah is a computer coder and app designer who lives in Inglethorne, California, while Zakat aspires to be an animator who will help put more Black hijabs on the page and on the screen with her illustrations. Living in Lullwood, Georgia, Zakat has a passion for art and the creative process. Although somewhat risk-averse, Farah is determined to follow the spark that compsci has inspired. Joined by a purpose, the three are committed to their cause—to deescalate the hate that erupts when people accept half-truths and rumors instead of considering the facts.

Terrified of not being able to control circumstance, coincidence, and chance, Bri uses her words to enlighten others and to lessen her own stress. “It’s scary that names can speak for someone before they’re given the chance to even open their mouths. Names can decide between who lives and dies. Between who can live in peace and who has to live in fear. Between those who can tell their own story and those whose stories are assumed before they can pick up the pen” (55). Wishing to fight preconceived notions, Bri wants to write her own story.

When they begin to receive threatening emails and hate-infused comments, these three characters created by Laila Sabreen in her novel You Truly Assumed ultimately realize that nowhere is completely safe and even bubble wrap doesn’t keep everything from breaking. As the trio fights to protect their dreams, they also recognize that people-pleasing muddles life’s paint palette just as surely as fear paralyzes a person.

Sabreen’s novel invites readers to wonder about the value of taking chances, accepting challenges, and protecting their dreams. Through her three protagonists, Sabreen suggests that although no breath should be taken for granted, we also shouldn’t spend our lives hiding: “Your breaths, your life, are too precious to spend it hiding, Bri. Spend it laughing, and healing, and making mistakes. You don’t have to prove anyone right, and you don’t have to prove anyone wrong. You only have to be you for you” (268-269).

Another key moral comes in the message about hate: “I never realized how easy it could be to let hate have the last word. To stop fighting and accept things as they are. . . . But I don’t think it’s in my DNA to do so. Despite the lessening of my trust in the world, I don’t want to silence my voice . . . . I have to keep speaking so that when other young Muslim women come after me and speak, their voices don’t only echo in isolation . . . but [instead] mend hearts and bring the world closer to what it can be” (276).