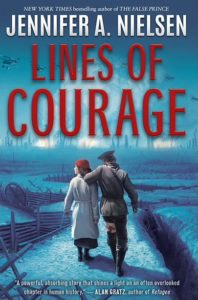 Lines of Courage by Jennifer A. Nielsen 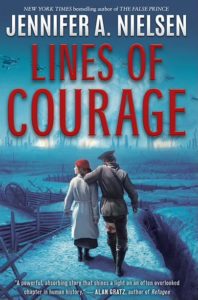 To reflect her view that the War to End All Wars didn’t do its job because of its complicated and convoluted nature, Jennifer A. Nielsen uses five viewpoints to tell the story Lines of Courage. Through her five protagonists, whose paths all cross, readers are invited to widen their perspective on WWI.

Living in Austria-Hungary, a twelve-year-old Jewish boy, Felix Baum was present on June 28, 1914 when he saw a glint of metal and could have screamed a warning. Instead, paralyzed by fear, he remains silent and watches the Archduke of Bosnia and his wife die.

The assassination sets in motion events that lead to World War I. Soon, the Baum family is forced to evacuate to Vienna. Before Felix’s father goes off to fight, he tries to give his son a family heirloom for safekeeping: the Golden Cross of Merit, telling him: “It is possible that while I am gone, you will need to find your own exceptional courage” (22). However, Felix will not accept what he has not earned.

The second perspective comes from Great Britain in 1915 where Kara Webb learns that kindness and humor are tools of nursing as much as a bandage or a brace. Despite being headstrong and disrespectful of authority, Kara works in her father’s memory, healing hearts and bringing joy and comfort where she can. For her act of compassion—hiding a wounded enemy soldier on the Red Cross train so that he could receive treatment—Kara is stripped of her duties as an orderly. However, because Kara saved his life, Sergeant Baum gives her the Golden Cross of Merit. Along with Sister Mary, Kara believes that “the Red Cross has no business deciding who is worthy of care and who is not. Our only job is to save lives. Let God and the generals decide the rest” (87). Because her beliefs are not in line with the rules, Kara faces the consequences of her decision.

Like Kara, Juliette Caron values human life over rules. Living in France in 1916, Juliette has lost her father to imprisonment. Taking to the streets to sell her possessions, Juliette wishes to build the resources to bribe officials for her father’s release. Kara—whose train happens to be in the area that day—buys Juliette’s red hat and then returns it to her as a gift, along with the Golden Cross of Merit to hopefully purchase her father’s life. During an evacuation order, Juliette is separated from her family and forced into labor camps where she experiences hunger, callouses, and the tragic tune of war.

Next, readers see 1917 through the eyes of fourteen-year-old Dimitri Petrenko who has been forced into the war out of sheer need for financial aid for his family who is living under Russian rule. For Dimitri, life is war, dark caves, wretched prison camps, and forced labor. It is also friendships and shell shock, with haunting memories of the trenches populated by lice, rats, disease, and despair.

Finally, we read from the perspective of Elsa Dressler, a character we met in Part I, but now lives in 1918 Germany. Through Elsa, we realize that war touches the lives of us all—even the privileged. We also recognize that holding onto our values and doing what is right is especially challenging when life is littered with difficulty and hardship.

Nielsen’s historical account, Lines of Courage sheds new light on understanding the war that toppled empires, drew new world maps, and changed the trajectory of world history—all because a driver in Bosnia took a wrong turn that led to the assassination of Archduke Franz Ferdinand. Her novel introduces readers to a period in history that in small ways mirrors the isolation, heightened anxiety, and worry about the future that has been imposed by the global pandemic—its deaths and subsequent social unrest. One of the novel’s memorable moments comes from Sergeant Baum’s description of a million: “Do you know that one million hours is more than one hundred and fourteen years? . . . In less than one year of war, one million of my countrymen have died or been wounded or taken prisoner. One million, and now I am one of them. If we took only a single hour to mourn each man we have lost, our mourning would not end for one hundred and fourteen years” (128).

With Sergeant Baum’s Golden Cross of Merit exchanging hands multiple times and through a red hat that travels, readers discover that life invites a long and crooked path as we pursue our goals. Travelling that path not only connects us, but along its route we find courageous people who are willing to do what is right rather than what they are told to do. These lines of courage are life lines that extend from ourselves to offer strength and encouragement to others.

Nielsen expertly defines courage as standing alone in difficult circumstances and still choosing to do what is right; it is acting with honor and mercy. Unless we leave the trenches of convention and the status quo, unless we take the risk to “go over the top,” we live a life of trapped monotony. Even though we are born into one trench and expected to remain in it, we have to wonder, hope in possibility, take risks, and climb the ladder to find freedom.

2022-07-23
Previous Post: You Truly Assumed by Laila Sabreen
Next Post: Tamarind and the Star of Ishta by Jasbinder Bilan