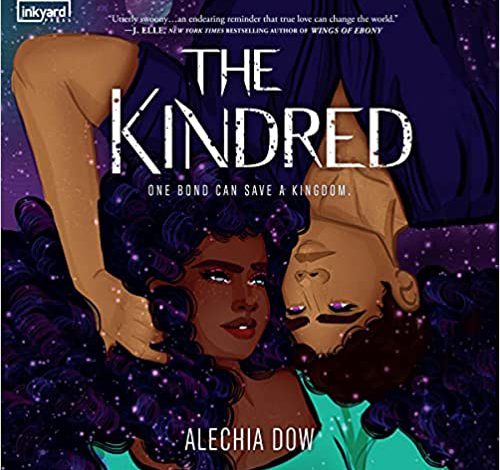 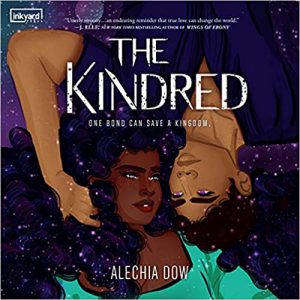 Alechia Dow writes an intriguing speculative story with her novel The Kindred. Her two protagonists—as is everyone else in the Monchuri system—have been linked with since birth. The Kindred program was created after The Second Chaos, a revolution in which the poor rose up demanding that their voices be heard by the rich. Maru’s top scientists created the mind pairing idea as a solution. Because those who are paired come to know each other’s thoughts so intimately, they often marry. However, in the case of Joy Abara and Felix Hamdi, a pairing is unlikely since he’s of royal blood and in line for the throne while she is dreadfully poor, living on the most impoverished plant in their system: Hali.

Still, Joy is Felix’s “best friend, moral compass, judge, and jury” (11). They share their thoughts and failures and triumphs with one another. Pampered, attractive, and passionate about music, Felix planet hops to perform on stage. Betrothed to Maxon KiBanu and hoping to simply survive her circumstances, Joy dreams of escaping poverty so that she can explore the world, draw all of her imaginings, and tell stories. Both Joy and Felix wish to live a life free of expectations and the idea of knowing one’s place. In Felix’s eyes, Joy is “sunshine and smiles and beautiful and smarter than anyone [else he knows]” (112).

On their seventeenth birthday, the pair is accused of murdering members of the royal family to attain the crown. Forced to flee for their lives and to escape the manipulative and potentially malevolent intentions of Arren Sai—the actual power-hungry man seeking to attain the throne—Felix flies his spaceship to collect Joy in Hali. Although they are hoping to reach the planet Ocara, the ship is shot at by their pursuers, forcing them to land on Terra (Earth) where Joy and Felix hope to refuel and make repairs.

However, Rocky Apply Key, Florida, is populated by humans that Felix considers backward and technologically delayed. Still, Rashid Jones assists them, offering friendship and services as a cultural broker.

In the course of her novel, Dow shares an interesting perspective on Earthlings as both ignorant and gullible: “The only interesting part about humanity is their lack of knowledge. They have limited understanding of the outside world . . . [and a tendency] not to learn outside themselves, preferring to focus on their own individuality, and then end up destroying each other in the process. . . .” (180). She further discloses the human propensity to judge a person’s ethnicity by a name or to discount a person who is different, to use fiction to understand reality or story to make sense of the world, and to spend too much time burying or hiding feelings when embracing them would not only improve life but make it so much easier.

Other intriguing aspects of the novel are Dow’s interpretation of the effects of colonization and a political system that reinforces classicism. One especially creative element is Dow’s creation story for the Monchurian and their perspective on religion: “Indigo was the god of music and the creator of the Monchuri System and all its people. . . . Indigo travelled between each world, teaching the people  music, giving them instruments, bringing peace, togetherness, and hope” (40). The idea of music as a tool for creation, peace, unity, and hope is an inspiring—if not romantic—one that Dow weaves into the tapestry of her story. “Music is universal. If people cannot hear it, they can feel it. They can see it. They can dream it. Our heartbeats make music” (301).

Ultimately, from Felix and his experiences, readers will learn to value what they have and be willing to fight for it. From Joy, we learn the value of love and relationships. “If love makes us better, then we need far more love in the universe” (300). The two also share perspectives about how humans often manage loneliness, brokenness, and depression with alcohol. Until he admits his feelings for Joy, Felix drinks to wash down his emotions and to hide from the truth. We also realize the extent to which we are programmed by tradition.

Joy’s assessment near the novel’s end provides good insight and advice: “Our worlds are unfair. No place in perfect, but we need to take care of each other and use compassion and not oppression. We need to give more than we take, help more than sit idle. It’s time for change.”