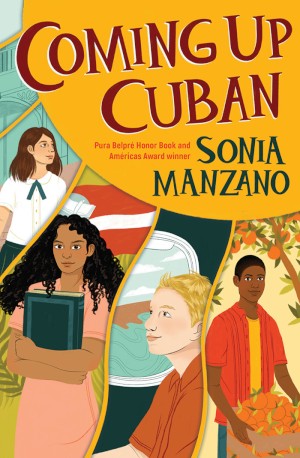 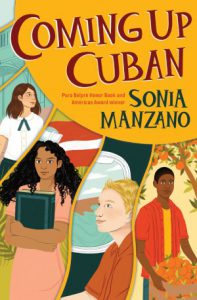 A master storyteller and the creator of the character Maria on the television program Sesame Street, Sonia Manzano brings to life the unfolding injustice of Fidel Castro’s reign in Cuba from 1959-1961. Through the narratives of four pre-teen adolescents in Coming Up Cuban, Manzano weaves a tapestry that captures a compelling period in human history.

Readers meet Ana Andino, an aspiring artist in Havana, Cuba, in 1959, whose father is a revolutionary. In Ana’s eyes, her Papi is fighting for an unjust cause—one that is keeping a rebel leader with suffocating rules and ideas in place. Rafael explains to his daughter: “This Revolution was fought to end a dictatorship. A dictatorship that made us unequal” (11). Yet, Castro replaces one set of bad policies for another that eventually result in the arrest of Papi and force Ana and her mother to escape to New York so that their voices aren’t silenced forever.

Other parents also fear for their family’s safety and refuse to allow their children to be brainwashed into thinking like Fidel. Their fear encourages them to send their children to the United States. Such is the fate of Miguel Reyes, whose parents use Catholic Charities to shelter their son. As part of Operation Pedro Pan, a slightly clandestine exodus of unaccompanied minors in 1961, Miguel is sent to Miami, Florida, where he navigates foster homes and orphanages until his parents are able to join him. Until this reunion, Miguel owes much of his survival not only to his ability to think for himself but to his friend Cómico who uses humor as a balm to the injustice the youth encounter.

Another perspective derives from Zulema Soto who lives in the Cuban countryside fetching water, feeding chickens and pigs, and sweeping the dirt floor of the family’s home. Zulema wishes to escape this poverty and her illiteracy. “I want to know more. . . . I want to know what the papers say underneath other papers. I want to know things that are beyond my reach” (197).

When she has the opportunity to learn to read through Castro’s literacy campaign, Zulema begs her father to allow the brigadista, the young teacher named Carmen, into their home. Yet, Santiago sees through the literacy crusade to its indoctrination attempts and evicts the brigadista from his home. Believing she has been cheated and betrayed so that she can remain a slave, [her] possibilities stolen so people can fight with Fidel about things [she cares nothing about]” (197), Zulema hates her father for a time.

The final eyes through which readers see are those of Juan Segundo who lives in Havana, Cuba. A fruit seller’s grandson, Juan dreams of being an engineer. But first he has to find ‘a way to be’ in this new Cuba. He resists the inculcation attempts of a youth socialist group, Los pioneros. This revolutionary instruction takes place in the schools under the reign of Castro who believes that religion fools people. Rather than believing in God’s power to grant things through prayer, Castro brainwashes the children into thinking that all gifts come from Castro. When Juan’s friend Paco becomes a spy for the movement, he leads children to believe that people who protect their belongings are traitors and fools them into thinking that Fidel gives them ice cream. With this turn of events, Juan’s friendship with Paco begins to unravel.

As bombings, beatings, and betrayals tear their lives and families apart, Ana, Miguel, Zulema, and Juan fight for their hopes, dreams, and beliefs. As authors of their own life stories, they refuse to give up. As they rise past Castro’s shadow, their strength and resilience remind us all of the words of Cuban poet José Martí: “The first duty of a man is to think for himself.”

Through these four separate life stories that weave into one another and under the influence of Manzano’s powerful pen, readers see how interconnected we all are, regardless of any tumultuous times we might be experiencing.