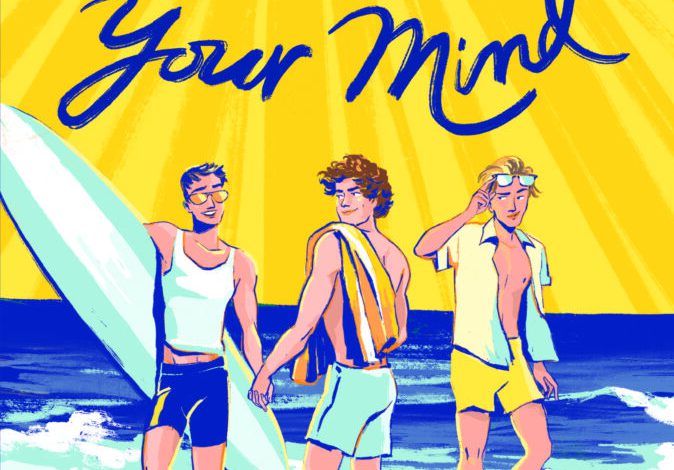 If You Change Your Mind by Robby Weber 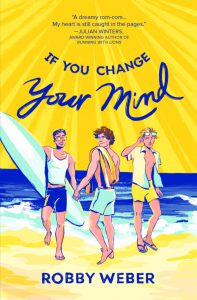 Robby Weber writes a romantic-comedy that moves beyond what I define as a beach book, a sugary treat to indulge a craving but not necessarily one that prompts deep thought. With his novel If You Change Your Mind, Weber explores topics like relationships and finding the core of what matters.

Even though real life and romantic comedies are very different things, under the influence of Weber’s pen, we realize that similarities do exist. To assist the reader in seeing some of these, each chapter is named for or alludes to a rom-com film to parallel the plot. Some of these include You’ve Got Mail, Serendipity, and I Know What You Did Last Summer.

During the summer before his senior year in high school, Harold (Harry) Kensington has nearly recovered from a bad break-up with Grant Kennedy, one that leads him to believe that real love exists only in books or the movies. From this plot thread, readers will recognize the value of having a support system to ensure healthy survival. Critical to such survival are a mom you look up to, sisters who provide drama and a distraction, and friends like Hailey Birch: a “funny, outgoing, wild ride of a best friend who is always down for whatever and looks out for [you] like family” (349). The friendship that Harry and Hailey share is one of mutual support. Caring, kind, and having big hearts, they not only have each other’s backs but cheer each other on, supporting one another’s dreams and together confronting life’s negative details. Theirs is a relationship rooted in laughter and love. However, dishonesty can rock that foundation.

Because Harry dreams of attending the University of Southern California’s School of Cinematic Arts, readers will follow him through the writing of a screenplay, “You’re My Hero,” which finds its way into the novel’s text as intervening chapters. Harry wants to be a screenwriter so that he can tell the story however he wants. Although with life we rarely have that kind of control, as a screen writer, Harry can build the relationships, define the characters, and manipulate the setting.

Hoping to spend his summer focused on writing the screenplay that will earn him a place at USC, Harry vows that he has no time to be distracted by cute guys like Logan Waters, who give him a weird sense of comfort. With plans to attend Columbia University in the fall, Logan is passionate about criminal justice and mathematics—two topics he hopes to combine in a career with the FBI as an agent who specializes in counterterrorism and digital investigations.

From this plot thread, readers not only learn some valuable advice about honesty but glean some tips for writing. Namely, that writing comes from genuine emotion and that writers are solving problems while sharing emotions and experiences. We also recognize how good writing can help us feel something. It “wakes something up inside us, asking questions and giving answers” (187).  Just as it provides empathy and an escape from life’s traumas: divorce, a bad day, failures, and heartbreaks; it celebrates life’s good moments and imparts wisdom. Some of those morals include how sometimes we try things, just to see whether we’ll be good at them or how secret keeping and telling lies have repercussions. We also get good advice: Because we really only have what is, we should not spend too much time obsessing over what could be. As authors of our own life stories, we need to manipulate the plot and revise the details that enable us to live out our best life. Eventually, Harry realizes that dreams, friendship, romance, and family can all exist in harmony.

Ultimately, this book set in Citrus Harbor, Florida, enlightens readers to the fact that an either—or mentality potentially closes off opportunity, and that sometimes, we get so caught up in “becoming” that we forget to just be.

2022-07-28
Previous Post: Tamarind and the Star of Ishta by Jasbinder Bilan
Next Post: Coming Up Cuban y Sonia Manzano