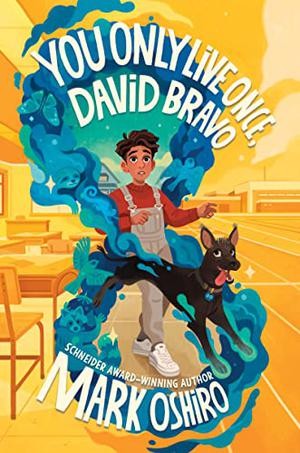 You Only Live Once, David Bravo by Mark Oshiro

With his novel—You Only Live Once, David Bravo—Mark Oshiro writes a time-bending adventure story for middle grade readers. The two protagonists, David Bravo and Antoine Harris have been friends forever, but now that they are entering Mira Monte Middle School in California, their lives are about to change drastically.

When his teacher Mr. Bradshaw invites the class to give a short, introduce-yourself presentation about their cultures and backgrounds, David is faced with indecision. What does he include or leave out? Adopted as an infant, David’s knowledge of his origin story is limited. As he overthinks the task, David faces an identity crisis: Who is he? Where did he come from? Why did his birth parents give him up?

Besides the mind-bending homework assignment, other mishaps occur on David’s first day: he eats tainted spinach, doesn’t make any new friends, and accidentally trips Antione—who sustains an ankle sprain during cross country practice. Now, David fears Antoine will blame him for ruining his running career and he will lose his only friend. And it’s all his fault.

Enter Fea, a non-corporeal timeline guide who takes the shape of various creatures. The Powers that Be give Fea liberties to offer humans a chance to redo a part of their lives. Because her initial appearance is as an Xoloitzcuintli, David gives her the name Fea, which literally means ugly in Spanish. Fea is able to manipulate time in service of a mission, so she takes David into the past so that he can make a different decision, repair his mistake, and hopefully set right his world. However, Fea’s powers get tangled and several things go awry. Soon, David is referring to her as a “shape-shifting chaos demon” (197) and beginning to believe that he’s so broken that he is not worth Fea’s help.

To assist him in unravelling the confusion surrounding his identity, David eventually consults his parents. They set in motion Project David to remind their son that he is loved and to give him a sense of place. From these experiences, David not only discovers things about himself but about his parents and his family’s culture. He realizes that identity is part choice and part heritage. David’s mother tells him: “I think where we come from helps place us in the world. It gives you a space to occupy that’s all yours. And sometimes, it’s really wonderful to find other people in that same space” (153).

On his discovery journey, David confronts his insecurities, begins to stand up for himself, and learns to believe in possibility. He also wonders whether he is a boy who likes other boys.

Amidst all of the plot twists in this book, Oshiro tucks some key morals. First, no matter how unlucky or unfair our lives seem, we have to remember that nothing is going to be perfect. We do best when we “think of life as a gift” (359) and don’t doubt ourselves so much that we forget to live our one given life. Second, under the influence of Oshiro’s pen, we obtain a remarkably appropriate definition of friendship: A friend makes you happy; “like every little thing they do makes you laugh or makes you think or makes you feel like there’s someone who just gets you” (322).