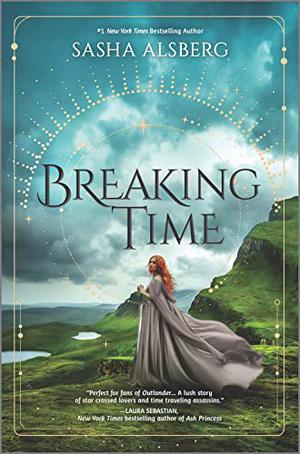 Set in Scotland, Breaking Time by Sasha Alberg tells the story of Klara Spalding and Callum Drummond who are from different times—Callum from 1568; Klara from the present. After saving Callum from death in the Elder Forest, Klara discovers that he is a time-traveler whose best friend was murdered in cold blood by what appeared to be a supernatural entity.

Being rooted to empirical observation and the scientific method, Klara trusts science, so the whole notion of time travel puzzles and confuses her. “The beauty and mystery of the universe had always been more than enough magic for her” (91). Now, Klara is confronted with a touch of the Otherworld and a threat by a supernatural being who claims that nothing will keep him from finding her by Samhain.

Klara consults with her grandmother, Adele Westwood, who knows the legends that tell of Arianrhod, the Goddess of the Silver Wheel. Somehow, Callum has Arianrhod’s mark, and Klara learns that she is a Pillar of Time. Together, the two—warrior and vessel—must find a way to stop Llaw from breaking the barriers of time and bending time to his will. Llaw’s quest for power is so great, that he has killed all of the other Pillars of Time. If Klara and Callum are unable to stop Llaw’s determined, demented, and dangerous actions, time itself will unravel. According to Arainrhod, once space and time fracture, eras will crash into each other, all scientific theories will be disproven, and a chaos that cannot be mended will erupt. “With every perversion, he disturbs the boundaries between worlds, each time producing a wilder magic than anyone can control or contain” (182).

In order to succeed in this quest, Klara must seek out her mystic centers and enter the Otherworld without disrupting the careful balance between the two worlds.

Breaking Time is a thrilling fantasy, adventure story. In the process of its writing, Alberg shares a key moral about sweeping difficulty under the rug so as to avoid complications. Instead, we must “lift up the rug and check on all discarded things, to blow the dust off and make sure they [don’t] come back to haunt [us]” (262).

She also shares an intriguing definition of passion, describing it as similar to “eating fire and dancing with flame as it consumed you from the inside” (225). Passion has the power to nourish while also threating to sweep a person away.