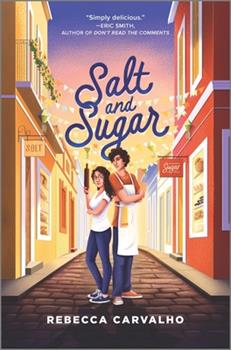 Salt and Sugar by Rebecca Carvalho

Set in Olinda, Brazil, Salt and Sugar is a modern twist on the Romeo and Juliet story by debut author Rebecca Carvalho. Seventeen-year-old Larissa Ramires and Pedro Molina are caught in a multigenerational family feud. Poisoned by rumors and misunderstandings, both teens are competitive and snide with one another. For example, Lari has always been told to “trust neither thin-bottomed frying pans nor Molinas” (7). Beyond the bias of the feud, Grandma has taught Lari that “kitchens are magical places, where everything turns into delicious memories” (83). So, when Grandma dies, Lari is left with a legacy that she doesn’t understand and mildly resents. Neither she nor her mother know how to be without Grandma Julieta.

To add to their difficulties, a new supermarket chain with their predatory pricing has moved into the neighborhood. Because of their lower prices and their garish caricature of the neighborhood feirinha, Deals Deals is driving many family-owned shops out of business. Although Lari understands that customers are drawn to the lower prices, she is conflicted. Many of the families of northeastern heritage don’t get paid enough, so the deals at Deals Deals will enable them to feed their families well each month. Still, she wishes they would play fair and stop trying to steal their clients and customers.

Despite being the daughter in a family of famous bakers, Lari has always been cursed in the kitchen. Like her father, who was killed in a motorcycle accident before she was born, Lari has a knack with numbers but a predisposition for clumsiness. Her mother is convinced that Lari will go to college, major in economics, and become an accountant just like her father. Lari, however, has aspirations to go to culinary school and wishes to join the Gastronomic Society and be a baker.

Pedro, on the other hand, is a talented chef. He is also a dependable guy who cares about community and loves food. Although he wants to upgrade some of the recipes at Sugar, to cater more to changing tastes, his grandfather Seu Romário will not alter tradition. Shaped by feelings of alienation, he, too, is adrift and seeking acceptance.

Given their hostility, for one another, the question remains: Can the two bakeries broken an alliance and join forces to stop Deals Deals? As the two teens make an effort to bring their families together, they not only discover that there’s something bigger than a family feud but that trust is hard won and easily lost. They also learn that a person is made-up of multiple versions. They see sides of one another that have previously remained hidden, so each begins to wonder which version is the truth.

Of the many morals in this tale, three stand apart: