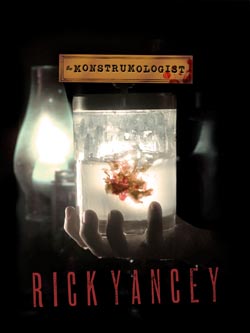 I’ve wanted to read Rick Yancey’s new book, The Monstrumologist, since it first came in last Fall, but never got around to it. Then it was named a Michael L. Printz Award Honoree, and I finally decided to make time to sit down with this intriguing looking book. And although it’s not quite what I expected, I am glad I did.  The Monstrumologistis the account of the spring of 1888 when Will Henry was a apprentice/assistant to the brilliant, but perhaps mad, Dr. Warthrop, who studies and hunts real-life monsters.  The story is framed by Rick Yancey’s present day acquisition of the notebooks from a doctor who cared for the aged Will Henry and the reader is purposefully left to wonder if these journals Mr. Henry kept are real, a work of his wild imagination, or the ramblings of a demented old man (and since only 3 of the journals are revealed here, more horrific adventures will be forthcoming).

A skillfully crafted, densely-woven prose narrative takes the reader immediately into Will’s life as a 12 year old orphan whose only refuge is the strange doctor of monstrumology, Dr. Warthrop.  On a spring night in 1888, a grave robber brings the Doctor a gruesome package: a hideous monster, choked to death by the pearl necklace worn by theyoung female cadaver.  The monster is from an ancient race, the Anthropophagi, from deepest, darkest Africa where it hunts human beings. First recorded in Ancient Greek mythology, the Anthropophagi are human-like creatures, without a head; instead shark-like mouths in the center of the chest, night-seeing eyes in their shoulders, and strength beyond the measure of a man.  What follows their grim discovery is whirlwind few days when Dr. Warthrop and Will Henry must discover the secret location and origins of the fierce Anthropophagi about to overtake New England and bring in the help of a man whose moral compass is so close to that of the blood-thirsty monsters it becomes almost impossible to separate man from monster.

Full of suspense and grisly, gorey detail, The Monstrumologistwill delight and enthrall horror fans and any reader who feeds on heart-pounding action, scary stories, and the macabre.  But there’s so much more to this story than simply a gore-fest; which is why, I believe, it was named a Printz Honoree.  If the reader takes the time to dissect this complex story, you’ll find meditations on themes such as personal responsibility; the complex relationship between fathers and sons, fraught as it is with expectation, disappointment, and longing; the role of parenting and socialization of children (Yancey points out many parallels between the child-rearing of the monsters and ourselves); questions of morality and humanity; and the thin veneer of society, religion, and civilization that supposedly separates us from the monsters inside ourselves.  A book that can be enjoyed on so many levels, and is so thought-provoking as to deserve a second (or perhaps multiple) read, is surely one I will recommend again and again.