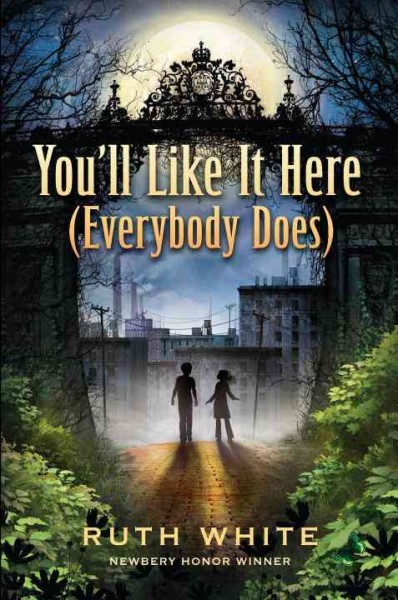 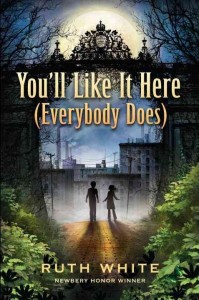 Reminiscent of numerous future dystopias, particularly Lois Lowry’s The Giver and TV phenomenon The Twilight Zone, Ruth White’s newest middle grade fiction offering, You’ll Like it Here (Everybody Does), is an unsettling, suspenseful adventure.  At first glance, the Blues are a typical American family: Mom’s an astronomy professor, Gramps is retired and loves puttering around his workshop and painting, 14 year old David and 12 year old Meggie are smart kids, who enjoy school and spending the summers traveling around the US.  But they’ve got a secret and when the townspeople become suspicious of them and barge into their farmhouse one summer night, the secret is revealed:  the Blues are aliens, refugees from the environmentally destroyed planet Chroma, and they’ve been living on Earth for years!

Barely able to make their escape in their dimension/space travelling “Carriage”, the Blues aren’t sure where in the Universe they’ll end up.  When they land, they find a planet that seems to be a parallel Earth, and at first they feel lucky to have found a familiar new home in Fashion City.  Fashion City is clean, safe, happy and peaceful, thanks to  “The Fathers.”  Time and time again, the Blues are told “you’ll like it here. Everybody does,” but there are some unsettling things going on, the least of which is a pill called a “Lotus” that all the residents of Fashion City take all the time.  When the Blues befriend a family living in the apartment above them, they learn more about the repressive rule of The Fathers and the steep penalties for even the smallest infractions.  When Gramps is forcibly taken away for the “crime” of being 65, the Blues must finally put their plan of escape from Fashion City into action, hoping they can save Gramps, their new friends, and themselves before it’s too late.

Fast paced, foreboding, and surprisingly not too far-fetched, You’ll Like it Here (Everybody Does) is a great summertime read. This cleverly imagined parallel world will send shivers down any reader’s spine and without even realizing it, kids will ponder the price of their individuality and the personal freedoms we all enjoy.