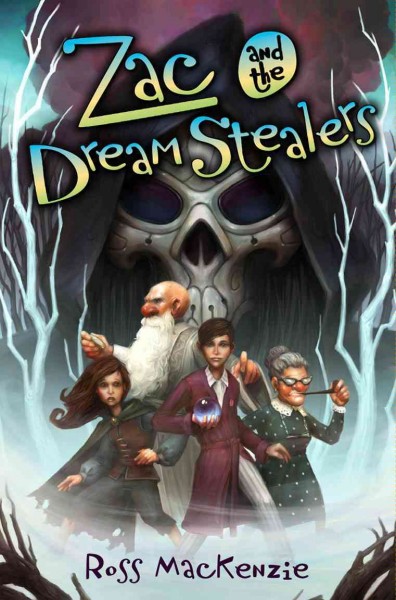 Zac and the Dream Stealers 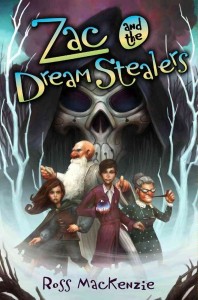 If everyone’s dreams are overrun by nightmares, how will anyone ever sleep again?  What if there was an evil force feeding on the negative energy in those nightmares, gaining power with every dream, preparing to take over the world?  Would anyone be able to stop the horror unfolding every night in every bed?

For eleven year old Zac Wonder, all he knows is that he’s been having some realistic, recurring nightmares.  The London newspapers are full of reports of sleep-deprived people doing some harrowing things as a plague of nightmares seems to be sweeping the nation.  But even more strange than this night-time horror, Zac’s old Granny, Eve, is acting odd.  Determined to find out what’s going on with her, at midnight one night he follows her out into a blizzard and watches as she disappears into the little fish pond in the backyard!  When Zac steps in to what should be 1 foot of water, he’s dropped down to a dusty old room far below the pond that is the gateway to the world of dreams – Nocturne.

Granny’s been summoned back to this magical world by the Knights of Nod to help them fight the Dream Stealers.  The menacing, evil Dream Stealers are turning people’s dreams into nightmares and feeding off the dark magic those nightmares create.  If the Dream Stealers get control of enough of the Dream Plains in Nocturne, they can take over both that magical realm and the real world, plunging every living thing into a life of horror and pain.  Granny takes Zac under her wing and brings him into Nocturne, ostensibly to keep him safe; but soon Zac discovers he has some surprising abilities that could be the key to turning the tables on the Dream Stealers and maybe even enable him to save both Nocturne and the Waking World.

Ross MacKenzie‘s Zac and the Dream Stealers is an enjoyable fantasy that will be a hit with Harry Potter fans.  From a trio of friends, to a boy who’s discovering his own unique magical abilities, all in a slightly quirky magical world that parallels our own, there are a lot of similarities that will appeal to Potter-fans.  MacKenzie plants some unique ideas here and there and as the series continues, I’m sure he’ll develop them into a world that will be all its own.  For now, this first installment is full of action, friendship, and just enough menace to set your teeth on edge without going too far into the deepest, darkest realms.