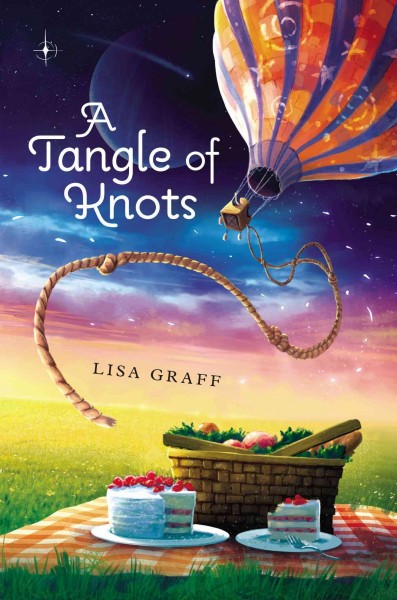 A Tangle of Knots 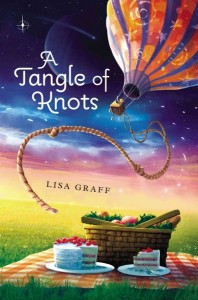 “Well, that’s the thing about knots, isn’t it?. . . If you don’t know the trick, it’s a muddled predicament.  But in fact each loop of every knot is carefully placed, one end twisting right into the other in a way you might not have expected. I find them rather beautiful, really.” (5) So says the Man in the Gray Suit, who appears and reappears unexpectedly, but at just the right moments, throughout Lisa Graff’s charming tale, A Tangle of Knots.  And while the man is talking about knots on the literal level, as we see in this finely crafted, intricately interlaced story of beloved things lost and serendipitously found, he’s also talking about the wonderfully knotty predicament called Life.

Each person has a Talent – tying knots, whistling, finding the perfect homes for lost things, applying blue eye shadow –  some are seemingly common, some are seemingly extraordinary, but everyone has something that makes them unique.  In this slightly magical world, 11 year old Cady’s Talent is baking – she can tell at a glance what the perfect cake will be for each and every person.  And she uses her Talent to make everyone she meets happier than they’ve been in a long time.  But Cady’s got a little place in her heart that can’t seem to be filled with happiness of her own: she’s an orphan who’s been waiting her whole life to find the family that’s perfect for her.

But on a foggy day, just like the one 11 years earlier when Baby Cady was brought to the orphanage, a whole tangle of threads – secrets that have been woven together by fate – start to unravel.  And as each person’s thread is revealed, we see how closely we’re all tied together and how wonderfully unexpected the mystery of Life can be.