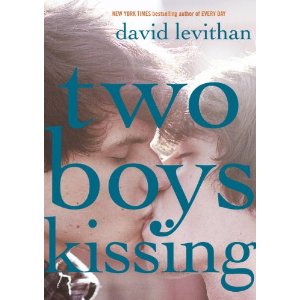 To describe David Levithan’s book Two Boys Kissing is like trying to nail Jello to a tree.  This chapterless book is a support 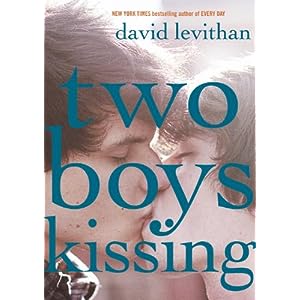 narrative and survival story for anyone who has considered suicide or who has been ashamed of his/her body, it is a love story, and it is a book about perseverance and finding a good time in a remarkably dire place, but most of all, it is a story of hope.  Although Levithan tells the tales of Tariq, Cooper, Ryan, Avery, Craig, Harry, Peter, and Neil, he also spins a tribute to all the homosexual men who came before them as forefathers in the civil rights fight.

Many of them deceased victims of AIDS, these forefathers—themselves inspired by Oscar Wilde, Walt Whitman, and James Baldwin—enter the story as an omniscient “we” throughout the novel.  Overseeing, protecting, admonishing, and advising, they reveal that gender doesn’t define a person; gender is merely a part of self-identification.  These advisors dispense additional gems of wisdom to all of us struggling through life: The ordinary becomes beautiful once it disappears, love is too painful to wish on anybody but too essential to survival to stand in its way, and “bliss is knowing the full meaning of what you have been given” (11) are three examples.

After Tariq Johnson, a dancer who wishes to go through life like a butterfly—colorful and soaring—experiencing the pureness of dreams and the freedom, heedless joy, and fireworks of the dance, is severely beaten despite his efforts to hide his sexual identity, Craig decides he can’t stand by, helpless and inactive.  He knows vengeance isn’t an option, but he wants “to show the world that he [is] a human being, an equal human being “(59).  He considers protests, gestures, and making the world watch.  Then he thinks about world records and the idea of “the kiss” as a political statement.  With the world watching via live internet feeds and eventually news reporters, Craig and Harry attempt to remain standing, without breaks and their lips touching, for 32 hours, 12 minutes, and ten seconds to break the world record for two people kissing.

While this drama transpires on the high school lawn—a test of pure fortitude and the effort it takes to endure—other stories are unfolding in other towns.  For me—a heterosexual female and hopeless romantic—Levithan’s insight about love is especially striking.  He reminds us that there is always something new to learn about the person you love and that a kiss can not only tell a story but bring you to life.  For parents struggling with a son’s sexual identity, Tariq says: “You need to love him.  I don’t care who you thought he was, or who you want him to be, you need to love him exactly as he is because your son is a remarkable human being” (84).  After all, the best love is “unfreighted by expectations, untempered by motives” (87).

The story isn’t, however, all romance and happily-ever-after.  It illustrates the distinct language of a father’s rage and the deeply desperate consequences of self-loathing.  It explores what happens when a person loses the ability to endure and admits that you cannot kiss your way out of hell.

Still, for any teen struggling with body image issues or shame, this book offers support. From each of the unique stories, readers also learn the various secrets of strength, acceptance, and beauty.  Most of all, Levithan celebrates life and love as the ultimate gifts.