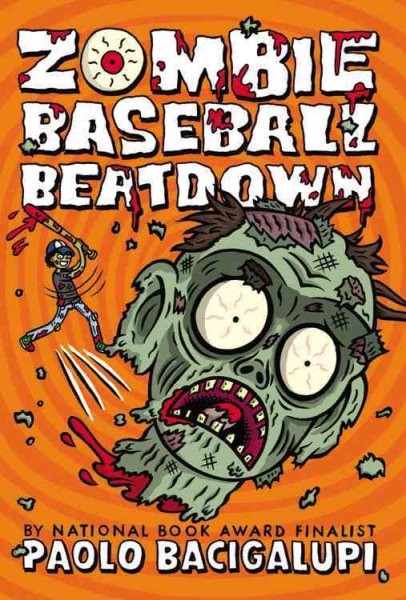 Ok, I am so glad to be a vegetarian.  All those terrible things that I could imagine happening at massive feedlots, huge industrial slaughterhouses, and behind the guise of corporate “farming”, happen in Paolo Bacigalupi’s nightmarish comedy Zombie Baseball Beatdown.  Milrow Meat Solutions processes enough beef to feed people in seven states, which means acres and acres of cows packed into feedlots in filth and excrement up to their bellies, a plant the size of a small city that employs vast quantities of undocumented workers who, for 24 hours a day, race to process thousands upon thousands of cuts of beef, and a research and development army fixated on producing bigger, fatter cows faster and as cheaply as possible.

Milrow Meats is the major employer in Rabi Chatterjee-Jones’ small Iowa town and the parents of most of his friends work there.  Rabi and his friends Miguel and Joe actually don’t think too much about Milrow (except when the manure lagoons are really stinky); they’re focused on their summer baseball team and its chances (or lack thereof) of actually winning any games.  They’re also pretty focused on an ongoing feud with Sammy Riggoni, the local bully and son of Milrow Meats president, and his gang who have it out for Rabi, Miguel, and Joe.  But then, some strange things start happening down at Milrow, including an explosion, a stink worse than any anyone can remember, and the deportation of many of the more vocal employees, including Miguel’s parents and his aunt & uncle.

Rabi, Miguel, and Joe start poking around down at Milrow and when they do, they discover something so horrifying, so sinister, and so unbelieveable they don’t know what to do – except fight back with baseball bats.  Because the terror that Milrow has unleashed has turned cows and people into the flesh-eating undead – Zombies!  And what’s worse, Milrow plans to spread the zombie-tainted meat across the whole seven state region they supply, consequences be damned.

Zombie Baseball Beatdown isn’t for the faint of heart; there are some zany elements, a little bit of coming of age and sports action mixed in, but it’s also gross and violent, and definitely disturbing.  Bacigalupi wants this book to be more than just a zombie action-adventure, though, so he adds in questions about corporate responsibility, industrial animal husbandry, food safety and, in case you need even more thrown in, a look at illegal immigration and racism.  Zombie lovers will surely enjoy Rabi, Miguel, and Joe’s gory grand-slam, but I think I’ll stick with a tofu dog with relish & mustard and some tots.