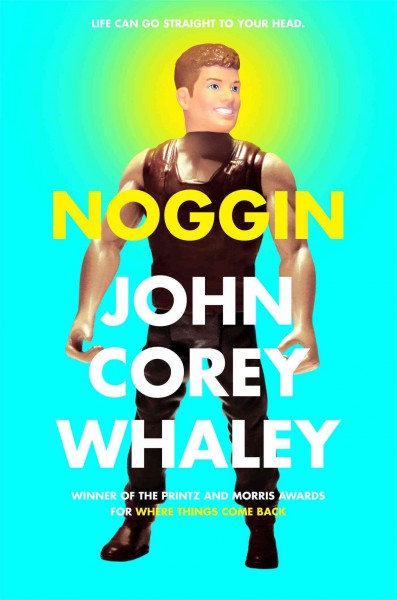 “Maybe time, as they say, is just a human invention. Maybe I never really left because leaving wasn’t possible. Maybe we’re all on a string, and maybe our past selves are on that string and our future selves are too… Maybe we all just exist, all versions of us just exist at all times, and we just have to figure out a way to get to each of them, to find each one and tell that version that it’s okay, that it’s all just the way it works, just a concept too powerful to ignore but too complicated to explain” (200)  Noggin, the latest from Printz Award winning author John Corey Whaley, is, in my opinion, “too powerful to ignore”.  A poignant, funny, heart-breaking, and thoughtful character-based story about the struggle for self awareness,  the desperate longing to cling to a past that’s gone, and the universal mystery of the nature of identity, you will see glimpses of your past, present, and future selves all reflected in Travis’ wholly unique, yet startlingly familiar experience.

Five years ago he was terminally ill so he and his parents decided to have his head removed and cryogenically frozen, in the hopes that someday science would be able to bring him back.  But no one expected that medicine would advance so quickly, bringing Travis back successfully less than a decade after his “death.”  To Travis, it seems as though minutes have passed; to everyone else – his grief stricken parents, his best friend Kyle, and the love of his life, Cate – the intervening five years have been a long slog through grief, and none of them are who they were when Travis “left”.

Travis’ new reality is confusing, frustrating, and so unfamiliar he spends most of his time agonizing over how to get everything and everyone back to the way it’s supposed to be.  Travis is convinced that if he could just get things back to normal, everyone would be happier and life would make so much more sense.  Of course, the trouble is that while those who love Travis are glad to have him back, they’re unable to return to a past that no longer exists for anyone, even Travis.