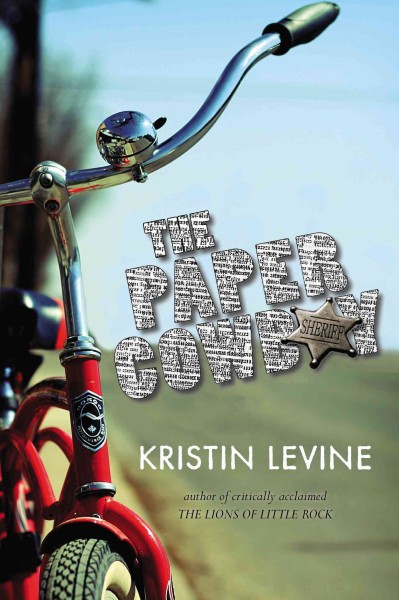 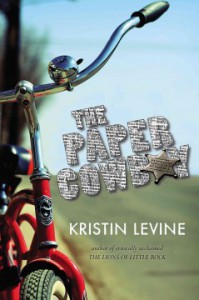 It’s been awhile since the last time I fell head over heels in love.

And, like all really good loves, I wasn’t looking for it.  Sure, I was anticipating a good story (I loved her first effort) but, “Hi-Yo, Silver”, I was not prepared for my intense reaction to Kristin Levine‘s The Paper Cowboy.  I’ve set aside everything else and have read this book 3 times (and that’s saying a lot) because there is just so much to unpack within these amazingly written 333 pages.  Rumor has it that there’s already buzz for the Newbery list (I hope so!) and I can’t wait until someone I know also reads this phenomenal book so that I can have one of those great, in-depth conversations you have when you are so overwhelmed by the sheer awesomeness of a book.  Let me know when you read it, my Book Friends, and we’ll meet for a coffee to enjoy my 2014 heart-throb together.

Set against the backdrop of the McCarthy era and using the 1952 Academy Award winning Western High Noon as a frequent touchstone, The Paper Cowboy explores how people handle moral dilemmas as far-reaching as social justice, what it means to be a community, especially during tough times, the destructive power of secrecy, and taking responsibility to do what’s right and as close to home as bullying, mental illness, developing a moral compass, learning to ask for and accept help, and the power of forgiveness.  At times, Levine’s book can be hard to read: it’s emotionally honest, gritty, and painful, but that’s also what makes it empowering and ultimately triumphant.  Levine successfully weaves historical events with a dynamic personal narrative, based, as were her first two books, loosely on her own family’s history, to transport her lucky readers into a richly textured world populated by deeply human, beautifully flawed, and vividly realistic characters whose stories you will not soon forget.

12 year old Tommy Wilson wants to be a cowboy “brave and strong and honest” (210) like his hero in High Noon.  He’s smart, charismatic, and a smooth talker, well liked by both kids at school and adults.  But this charming side masks secrets Tommy would rather not admit to: he’s a bully, picking on boys at school and even stealing from the local grocer, and worst of all, his home life is out of control as his mother’s mood swings have gotten so bad she’s taken to beating Tommy.  When Tommy is caught stealing, he’s forced to work in Mr. McKenzie’s store on Saturdays and he doesn’t take his punishment like an honorable cowboy would: instead, he plants a communist newspaper that he found at the neighborhood paper drive in the store, which, once discovered, has life-changing repercussions for Mr. McKenzie’s family.  After his older sister is terribly burned in an accidental fire doing his chore, the beatings at home grow worse, Tommy’s bullying spirals out of control, and he’s wracked with guilt, stifled by shame, and desperate for a way out.

Eventually, Tommy decides that just like the cowboys in the movies, the burden to make things right lies on his shoulders: he’s taken over his sister’s paper route and starts using it to root out the real communist to be able to clear Mr. McKenzie’s name; he backs off on bullying his prime target at school, despite his friends’ teasing; and he confesses his troubles to a few neighbors.  Ever so slowly, life-changing things start to happen as a result of Tommy’s efforts, proving to him, and to the rest of the people in his life, that if you are lost in the darkness, you don’t have to face it alone. Asking for help is both honorable and brave, and there are good, strong-hearted people around you who will step up and do what they can.