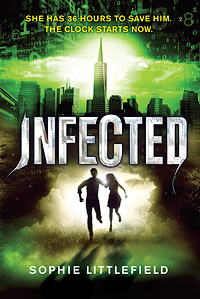 By: Donna
In: Action & Adventure (YA), Mystery & Suspense (YA), Young Adult Book Reviews

Focused, driven, athletic, and gifted with anything mathematical, Carina Monroe plans to major in mathematics with a focus in cryptography when she graduates from Martindale High.  But her plans get sidetracked when her mother commits suicide, leaving her with a deep chasm of grief, loss, and loneliness that nothing can fill—until she meets Tanner Sloan.

Tanner, who loves computers and lives in a loud, boisterous family, makes her realize that life can be more than work and study. Carina’s therapist has tried to help her heal, but Carina’s lies create an obstacle in that arena.  Still, Carina finds some of the therapist’s advice helpful, like his suggestion that Carina return to the track team.  Belonging to the team and giving her body a physical outlet distract her from her emotional pain, as do the Daily Appreciations, an exercise that involves thinking of three things to be grateful for and saying them out loud every day.  Although she includes the “sweet and demonstrative” Tanner in her daily appreciations, Carina fears love above all other emotions because it has always been linked with loss.

Proof in point, she’s now burying her Uncle Walter, her last living relative.  Both her mother and her uncle had worked for Calaveras National Laboratory on highly classified projects involving national security.  Uncle Walter used to joke that he didn’t need security guards to build the modern K ration, and Carina “doubted that anyone cared very much about modifications to the diet of armed services members” (9), but Uncle Walter’s sudden death leaves her suspicious.  When Tanner asks about black ops and when the two of them start to experience unusual symptoms, making them both ultrasensitive and hyperaware, Carina’s curiosity is aroused.

That curiosity shifts into overdrive when Carina finds a note from her uncle with an unmarked key, an address to an apartment, and a warning to be careful around Sheila Boylston, who had been Walter’s lab and research partner on Project Venice.  Although Sheila attempts to explain the danger of their present position and that the Albanian mafia—who probably had Walter killed—wishes to steal their research, Carina won’t believe that Sheila is trying to save her life and protect her uncle’s reputation.

Soon, Tanner and Carina are pursued and shot at, caught up in a bioterrorism threat, and unsure whom to trust.  With their combined computer skills and code cracking abilities, they learn more about Project Venice and realize its potential repercussions.  They also realize the depth of deceit and the power of love to inspire action.

These events unfold in Sophie Littlefields’s novel Infected, due for release in January 2015.  In her mystery-thriller, Littlefield presents the world as an unstable place, “a global marketplace for terror” (208).  Into this mess, she thrusts two teens who are attracted to risk, danger, and the unknown.  They must unravel the cryptanalysis problem or die trying.