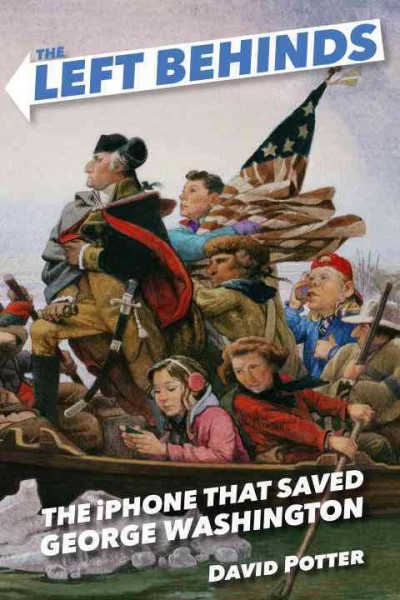 The Left Behinds and the iPhone That Saved George Washington 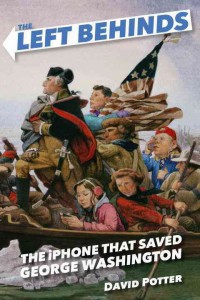 How do three twenty first century tweens from the prestigious east coast Fredericksville School in New Jersey end up in a smelly stable standing over the most important guy in United States’ history?

After being left behind at Christmastime by parents who are too busy, too famous, or too self-absorbed to care for their children, Beverly, Brandon, and Mel go on a field trip with their chaperone Mr. Hart to view a reenactment of the famous Crossing of the Delaware.  When Brandon fiddles with a Macbook, the trio ends up participating in the historical event instead.

Victims of time travel, Beverly, Brandon, and Mel are the left behinds.  A bit of a drama queen whose attitude is clothes, Beverly plans “to be a biochemist one day and find the cure for cancer. That, or save the lives of newborns as a pediatric neurosurgeon. . . . Anything that is useful, practical, and as far away from Hollywood as possible” (10).  As a result, Beverly is quite put-upon to have to spend her Christmas holiday with Brandon, a somewhat goofy guy who pretends to be slow-witted, and Mel, a self-proclaimed history nerd who would rather watch the History Channel than play Xbox.  After the three find George Washington lying dead, shot in a horse stable, Bev is even more put-upon since she doesn’t “even like to read about history, never mind live in it” (240).

Determined not to be “a potted plant,” someone who just sits around, Mel decides it’s up to them to save the Revolution.  Through a text from Mr. Hart, Mel learns that the tweens will not be able to return to the twenty first century unless they have at least 50% power, and in 1776, a place to recharge their iPhones is nearly impossible.

After Bev and Brandon are captured, Mel befriends two local farm children, Elizabeth and Daniel.  With their help and that of Juniper, a mare with only two gears—slow and slower, they make haste to find Dr. Benjamin Franklin, whom they’re sure will help them to reverse a monumental historical error.

But no one takes a twelve-year-old seriously, so events unravel at a frightful pace.  When Mel notices an ap called iTime on his iPhone, he decides not only to solve the mystery of time travel but to determine who is trying to change the course of history.  When the five youth are reunited, they become the Secret Service of 1776, and Mel sees a different side of General Washington than that revealed in the painting, one that’s not particularly determined and noble.

The Left Behinds and the iPhone That Saved George Washington by David Potter is historical fiction at its best because it puts a human face on history, making the people and events relatable and more relevant.  Readers meet the real men behind the iconic figures George Washington and Benjamin Franklin have become.  After reading Potter’s book, young readers will view everything from Leyden jars to the Battle of Trenton, the Crossing of the Delaware, and the American Revolution with a different perspective.