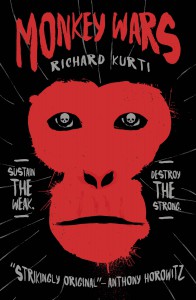 As a female rhesus monkey, Papina has brown fur and a pink face, while Mico, a male langur monkey, has grey fur and a black face.  Although appearance, biology, and gender separate the two, they are not that different.  Living in Kolkata, India, both envision a more nearly perfect world, one where determination, courage, and wit are celebrated; rather than one’s size or social rank.  Daring to question and unwilling to blindly obey, both want to understand the mysteries and deceptions that surround monkey life.  Sickened by violence, they wish to understand why killing is necessary to keep the peace.

Through the stories of these two monkeys from different troops, British author Richard Kurti takes on one of the oldest philosophical questions in human history: How willing are we to sacrifice friends, family, security, and survival for a moral principle?  In order to discover the strength of character, the courage, and the insight required to disagree with everyone we love and everything we know, Kurti writes about the dilemma in an effort to discover an answer.   In the process of deconstructing the hierarchies we see—whether in business, education, government, clergy, or some other social, political, or religious setting—he also confronts the difference between strength and power and asks, What is the best way to fight tyranny?  After all, “individual decisions made on the most personal level can ultimately be connected to global events” (401).  By writing about monkeys in his novel Monkey Wars, Kurti tells a story that cuts across culture, time, and geography.

A small monkey, Mico feels like an outcast, until Tyrell defines for him the different types of strength, telling Mico, “Your mind is the key to power” (138).  As a member of the Intelligence Division, Mico experiences an intoxicating mix of flattery and respect and discovers that real strength comes in knowledge and connections.  Longing to improve monkey life, Mico’s efforts to achieve peace end up escalating the war.   When Mico realizes that virtue alone is not strong enough to counter the diabolical Tyrell and his plan for world domination, he dedicates his life to setting right a world gone rotten; he has to destroy what he helped to create.  But will his honesty, honor, and common sense count in a reign of terror with a tyrant who knows that the monkey who controls the past controls the future, who knows that controlling the flow of information and the food supply creates dependence, who knows how conformity eats away courage, and who knows the power of spreading propagandistic lies to manipulate truth and inspire fear?

Reading this beast fable, I was reminded of Animal Farm by George Orwell, Watership Down by Richard Adams, and The Crucible by Arthur Miller.  Kurti’s Monkey Wars takes the most memorable thematic features from those three stories to explore the use and abuse of power and the presence of evil in the world.

In allegorical fashion, Kurti describes the complexity we all confront when we attempt to fight the status quo, to defend freedom of speech and democracy, to stand up to bullies—whether intellectual or physical, and to use our voices to speak out.  Through Papina and Mico, readers learn that we must stand up for what is right, even if we stand alone; that order, hierarchy, discipline, and obedience don’t constitute strength.